Newlywed Advice: How The Clintons May Be Counseling Rep. Weiner And Huma Abedin 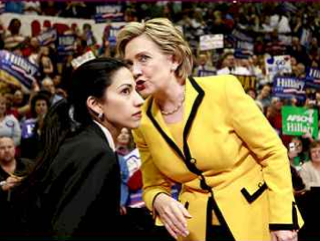 Rep. Anthony Weiner bitterly joked on CNN the other day that he hopes his marriage survives its first anniversary next month. Much has happened since that joke, and with today’s revelations that Rep. Weiner might have a “sexting” problem, the odds of succeeding there dropped precipitously. At times like this, couples may turn to the person who officiated their wedding for ‘spiritual’ guidance. In Rep. Weiner’s case, that means one Bill Clinton could be offering advice on how to salvage a marriage smeared by a sex scandal. He does, after all, have some experience in that department.

The former president, of course, does not have a known record of putting illicit photos of himself on the internet, but one could argue this is a generational coincidence. His marriage and presidency both survived the greatest (yet most frivolous) political scandal since Watergate when the President was found to have engaged in oral sex with a White House intern, prompting a generation of ’90s kids to ask their embarrassed parents: “What’s oral sex?” Shirtless photos to an unknown recipient– Big Government describes her as “the young girl,” eliminating the possibility that the recipient could be his wife– may seem like child’s play to a man whose libido almost got him impeached.

Given that “Weinergate” is nothing if not a scandal fueled by unnecessary speculation, one can’t help but wonder what President Clinton would tell Rep. Weiner to do in times like these, perhaps over a fancy dinner in Manhattan. Oh, to be a fly in that soup. The former president had similar tools in his favor to the Congressman; for one, neither of them have ever run on a “family values” platform, nor have pretended to be morally superior to anyone. The hypocrisy factor is nonexistent. As a master politician, one could imagine Clinton to be advising Rep. Weiner to use that to his advantage, as well anything on his political record that categorically defies “family values,” like gay and abortion rights. Any savvy political observer would realize that abortion has nothing to do with same sex couples, which has nothing to do with sexting, but savvy political observers are not his target demographic at the moment.

Then there’s the oratory Rep. Weiner should be using to ingratiate himself with a public whose collective eyebrow now rests somewhere solidly in their widow’s peak. Here the Congressman has been at his weakest, calling a cable news producer a “jackass” in his first presser, telling Wolf Blitzer that he could not “with certitude” identify his own crotch, and ultimately simply shutting all of the media down. The little he has spoken to the press has only served to turn them against him. Clinton was far less combative in his day– choosing to admit his transgressions without admitting them (“I did not have sex with that woman” was sort of true), and sticking to quibbling over insignificant details when pressed on facts that matter– like the definition of “is.” It was ultimately so absurd it won those with a wry enough sense of humor and lack of trust in government over. Given that Rep. Weiner’s political career is cut of a similar cloth, using humor and distraction in his favor– as well as angering the sort of Republican that would win him fans on the left– could very well help him out of this.

And, of course, one imagines the former Commander in Chief would have one final bit of highly detailed, incredibly important advice: “If you have any spare dresses lying around, send them to the cleaners. Immediately.”

That Rep. Weiner and President Clinton are known to double date is not exclusively the province of their friendship– Huma Abedin rose to prominence as an aide to Sen. Hillary Clinton long before she was married to the New York Congressman. One could imagine the former First Lady has a little bit of advice on making lemonade out of infidelity, too, given her ability to survive– and thrive– in light of her husband’s hurtful mischief. As collateral damage in this mess, Abedin has far fewer options from which to choose; it’s basically either “sit tight” or “go public.” The current Secretary of State wrote the playbook on how to survive an international sex scandal and wind up in a better position, avoiding being pegged a victim, but her circumstances and ambitions were so far from Abedin’s current reality that the rules in said playbook may not even apply.

For one, Clinton had a decades-long marriage and a teenage daughter to worry about. While he may not have proven it in any physical way, the President had fulfilled his commitment of sticking beside her for the better part of a lifetime. Rep. Weiner has apparently been loyal for, at most, about ten months (today’s photos having been sent in May). Not being able to resist other women (allegedly) less than a year into their union– that’s some serious marital ADD. With no children to worry about and no proof of commitment, it’s possible Hillary Clinton could have some very divergent advice from the behavior she displayed herself, although Abedin’s dignified silence up to this point is quite reminiscent of Clinton’s poise at the time.

For now, the evidence is incomplete– though damning– and the odds stacked against them. After all, even if Rep. Weiner somehow manages to explain this one away, what could become months of public scorn and scrutiny may take its toll on the couple– all the more reason they may be turning to the gold standard of teflon couples for help.