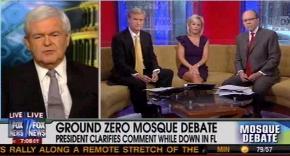 There have been plenty of tremendous and troubling leaps made when trying to express outrage over the Islamic Center proposed near Ground Zero (this weekend with Sarah Palin, who called it the “9/11 mosque” on Twitter, for example), but Newt Gingrich may win the award for most offensive analogy.

Building the mosque near Ground Zero, says the former Speaker, is like putting a Nazi sign near the Holocaust Museum.

Gingrich has made this comparison for a couple days now, including this morning on Fox & Friends, when he said:

The folks who want to build this mosque, who are really radical Islamists, who want to triumphfully (sic) prove they can build a mosque next to a place where 3,000 Americans were killed by radical Islamists. Those folks don’t have any interest in reaching out to the community. They’re trying to make a case about supremacy… This happens all the time in America. Nazis don’t have the right to put up a sign next to the Holocaust Museum in Washington. We would never accept the Japanese putting up a site next to Pearl Harbor.

We could spend a few paragraphs breaking down just how ridiculous the Holocaust Museum analogy is, but basically, Ground Zero is where a terrorist attack took place, and the Holocaust Memorial Museum is a museum built to “inspires citizens and leaders worldwide to confront hatred, promote human dignity, and prevent genocide.” Also, it’s unclear what a Nazi sign would look like, but in the analogy it would have to be a Nazi Cultural Center, where the Aryan master race can swim and exercise, I guess. And of course, in the analogy, Muslims are Nazis.

At the exact same time this was going on on Fox News’ morning show, MSNBC’s Morning Joe was discussing Gingrich’s comments. “To suggest that someone trying to build a tolerant center for moderate Muslims in New York is the equivalent of killing 6 million Jews is stunning to me,” said Joe Scarborough (it should be noted, that’s not exactly what Gingrich was implying). Also, Mike Barnicle referred to Gingrich as a “political pyromaniac,” continuing, “he is just putting gasoline on fires that don’t even exist.”

I suppose it shouldn’t be surprising that Godwin’s Law would inevitably show up in the Ground Zero Mosque debate. And while others like Gingrich are making absurd political arguments about the ultimately local issue, there are strong voices making reasonably points to. Here’s a fantastic take from Josh Barro of conservative National Review, some smart discussion from the weekend Fox & Friends crew and this photo essay of other buildings near the hallowed Ground Zero, which highlights the utter ridiculousness of it all.

But Gingrich is a powerful pundit, and someone who will only get more powerful as his stock continues to rise as a 2012 GOP nominee.

So while Gingrich brings up Nazis, and opponents bring up stats about how the majority of Americans oppose the structure (and even the majority of New York residents), the story will remain at the forefront of cable news coverage. It’s sad that it’s come to this, but also inevitable. A heated issue that combines freedom of religion with 9/11 allows for a wide variety of opinions and arguments.

But it doesn’t make Gingrich’s tactic any less offensive: