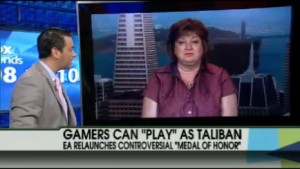 Electronic Arts’ upcoming Medal of Honor video game, set during the current Afghanistan conflict, allows gamers to play as Taliban fighters, a feature that doesn’t sit well with everyone. Gold Star Mom Karen Meredith took to Fox News over the weekend to express her displeasure over the game, calling it disrespectful.

In response, a blogger at Hot Air knocked Fox, and presented a rather tone-deaf rebuttal that compared the War in Afghanistan to a game of “Cowboys and Indians.”

Here’s the weekend Fox & Friends segment, in which weekend anchor Clayton Morris does an excellent job of presenting both sides of the argument, and even appears to defend the game:

Hot Air’s Madison Conservative (in a Green Room blog promoted to their front page) strikes back at Ms. Meredith, and Fox, snarkily asking “Did she say World War 2 wasn’t based on real people?”, and avoiding her central point completely. Citing WWII games, and other games in which gamers can assume terrorist identities, Madison Conservative never gets around to explaining how they relate to Ms. Meredith’s objection, that this game essentially allows players to go gunning for virtual stand-ins for her late son (Lt. Kenneth Michael Ballard), and other US soldiers still fighting for their lives in Afghanistan.

To wrap up this exercise in sensitivity, the blogger sums it all up with a deliberately offensive, random shot at people who dare to be considerate of Native Americans:

News flash: they were all video games. They were all imaginary. They all required two sides. If one side was the heroes, the other was the villains. This concept is not new.

Did NOBODY at Fox ever play Cowboys and Indians as a kid? Oops, I’m sorry. That’s racist, isn’t it?

Well, now that he mentions it, the fact that he went out of his way to use that example is kind of offensive, since Electronic Arts offered up several other examples in its statement:

Video game blogger Owen Good takes the dickishness to 11, referring to Karen Meredith as “this woman,” and summing up with a rather unflattering comparison:

Fine. I think trying to convince her of this game’s legitimacy, and the respect gamers still have for the armed forces despite (and perhaps because of) playing it, would be like talking to a stop sign. She’s done a very good job of going out of her way to be offended by something she doesn’t consume, and then relying on her martyr status to get her way.

Despite being a complete tool about it, Good makes a decent point. Although it’s tempting to laugh at the idea that a Red-Bull-and-Andy Capp Cheddar Fries-fueled Medal of Honor marathon is some kind of tribute to the fallen, the fact is that this game’s popularity will rest on the fact that these gamers idolize people like Karen Meredith’s son. Whether the game amounts to tribute or trivialization is another matter.

Fox’s Clayton Morris probably makes the best point, which is that Ms. Meredith is really framing a larger discussion about war as entertainment. In that context, this is all in the eye of the beholder. A film like The Hurt Locker can deliver that visceral first-person rush, while also bringing home the consequences of war.

Can a video game be placed in the same category? The trailer for Medal of Honor is a dizzying mix of mind-blowing action, punctuated by moments of drama that clearly attempt to deliver an emotional punch. In style and execution, it’s hard to argue that it isn’t at least the equal of a Hollywood war epic:

If you accept the premise of video games as art, then the multi-player mode becomes more analogous to an actor, like Ralph Fiennes, portraying a villain in a movie, like Schindler’s List. Was Fiennes’ portrayal an expression of sympathy for his Nazi villain?

In the end, this is a free country. Karen Meredith has every right to be offended by this game, and gamers have the right to push back. It would be nice if they, and Electronic Arts, could figure out a way to do that without mocking, or trivializing, her legitimate concerns. That’s a heavier lift, requiring them to take the full measure of the sacrifices that make this game possible, each and every time they play (or sell) it.