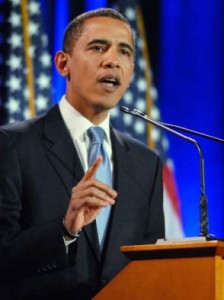 This is what happens in August: Congress goes into recess, lots of Americans go on vacation and, consequently, the media has an existential crisis brought about by less political drama to cover and fewer people following the news. On the upside, though, it’s always entertaining to see what the media comes up with to fill space. NPR’s Linton Weeks, for example, contributed this August gem today in which he spent over 1,500 words analyzing President Obama’s oratorical tics. (And yes, I’m well aware that by covering the August fluff stories I am, in fact, contributing to the fluff. It’s August.)

Noting the discrepancy between the poetic rhetoric of Candidate Obama and the more practical, sometimes pedantic, tone of President Obama, Weeks pokes fun at the language tics Obama has picked up since assuming office. Specifically, he notes the president’s newfound affinity for beginning sentences with “now” or “so.”

Take a look at his remarks at the Aug. 11 signing of the Manufacturing Enhancement Act of 2010. It’s a no-big-deal 10-minute speech of 20 paragraphs. After welcoming people to the White House, Obama began seven of the next 11 paragraphs with the words “now” or “so”…

According to the transcript of his Aug. 9 speech in Austin on higher education and the economy, Obama started paragraphs with the word “so” nine times and with the word “now” six times. Speaking on behalf of senatorial candidate Alexi Giannoulias at an Aug. 5 rally in Chicago, the president began paragraphs with “now” six times and “so” five times.

Weeks interviewed Wesleyan University’s Elvin Lim who has dedicated not just 1,500 words to presidential speech writing but an entire book called The Anti-Intellectual Presidency: The Decline of Presidential Rhetoric from George Washington to George w. Bush.

According to Lim, “now” and “so” can act as “rhetorical pivots” or pre-emptive qualifiers that allow Obama to acknowledge both sides of complex issues. Unfortunately, the nuance-allowing pivots often result in Obama sounding like a lecturing professor, for which he has received considerable criticism.

And of course, no article in an election year is complete without the necessary reference to poll numbers and the president’s approval rate:

Obama’s lack of inspirational oratory may partially explain why his approval numbers are down. According to a mid-August USA Today/Gallup poll, a majority of Americans disapprove of the way Obama is handling many key issues — including health care, the situations in Iraq and Afghanistan, the deficit, the environment, the economy and immigration.

Perhaps he needs to invigorate the American people as well as inform. To exhilarate as well as explain. To touch as well as teach.

I’m going to assume that Weeks is employing some tongue-in-cheek poetic language there at the end rather than being serious.

In the meantime, there’s something comforting about knowing that NPR is paying someone to read through presidential transcripts and count how many sentences begin with which caveat-indicating word.