Nexus One: The Google Phone Is Live!

Nexus One: The Google Phone Is Live! 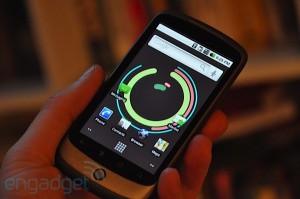 What we already know about this new year: 2010 is going to be different. As CES approaches, a new 3-D reality looms for TV and Boxee is geting ready to change the game — but first: Nexus One.

Nexus One is Google’s new android smartphone, or “Superphone” as they like to say. Engadget and Gizmodo both have in-depth reports, but for the neophyte, here are a few quick features, condensed from Mashable’s list (parens are my comments):

– Every text field is voice enabled. Every time you speak, it will process your speech into text. It gets better and better the more and more you use it. (Emphasis added because that is awesome)

– The camera is 5MP with LED flash. (Engadget is impressed with the camera). If you tap on an album, you’ll be able to quickly scan and load photos. You can also tip and dip photos based on your hand motions and the accelerometer.

– It’s meant to be totally customizable. Touchscreen features are more dynamic: For example, one of the wallpapers is a lake with leaves. When you touch it, it will ripple.

– You’ll be able to buy the phone at the Google web store, which was leaked last week. You can find it at Google.com/Phone.

It seems borne out in the use, too. Fred Wilson, investor, entrepreneur and all-around tech-maven, has been using it for a few weeks and wrote about it early this morning once the clock struck Jan. 5th, explaining why he’ll “most likely stick with this phone for a while longer”:

I’m at the gym on elliptical trainer typing this into the Android browser. I connected to the gym’s wifi without hassle, something my security obsessed blackberry fails at regularly. Then I checked in with the awesome android Foursquare app. Then I put on last.fm “my library radio”. Then I launched the killer android browser and went to typepad and started writing this.

I could have done all of that on the iPhone except the part about running multiple apps the same time. Which is a big deal by the way.

People seem duly impressed. Obviously people have been waiting for this for ages — and Google has carefully built excitement sped along by leaks — but you know Google wouldn’t come out with something like this in this market if they didn’t have the goods. That vaunted showdown between Apple and Google for smartphone dominance has begun, even if this launch doesn’t necessarily presage instant market switchover. It’s more that the gauntlet has been thrown. Though I will say that at first, unstudied glance, the Nexus One isn’t as pretty as the iPhone or really Apple’s i-anything. Design has been a big part of the iPhone’s appeal — those adorable, precious commercials are only as adorable and precious as the product, which is very. That said, the Nexus One has that geek-sexiness thing going for it, and maybe the 2010s will be about moving away from cutesy-round-cornered white devices typefied by skinny hipsters in skinny jeans. Here’s Engadget’s conclusion: “Class-leading processor, vibrant display, sexy shell, and just a sprinkling of geekiness that only Google could pull off this effortlessly.”

It’s a long way from the rotary dial. And the 2010s have only just begun.