Antonio Gates has a very clear message for Joey Bosa.

The linked story from the totally, ridiculously objective NFL.com gives a completely neutral, impartial account of the ongoing contract dispute between no. 3 overall draft pick Joey Bosa and the San Diego Chargers. At issue, according to the San Diego Union-Tribune, are two points: The timing of the payout of Bosa’s $17 million bonus (Bosa wants it paid before the end of 2016, the Chargers want to defer a significant portion until 2017) and language which takes the Chargers off the hook on some of the bonus if Bosa leaves the team (a complex issue, but this language would likely cost Bosa at least some money, so he’s fighting it).

The merits of Bosa’s holdout are a separate issue entirely from the NFL’s interference in it. The former can be debated. The latter, in our opinion, cannot.

This is an issue between the San Diego Chargers, and their would-be rookie defensive end. It does not involve the NFL.

And make no mistake. By quoting Antonio Gates, a popular Chargers veteran, being critical of Bosa for their audience of 19.7 million, the NFL has placed its finger on the scale. They’re pressuring Bosa into accepting the Chargers’ offer. And that is scary.

Because today, yes, we’re talking about pennies for a guy who is likely about to become very rich very soon. Tomorrow, who knows? The $17 million signing bonuses could soon be drastically reduced.

And frankly, the Chargers have plenty of leverage without help from the NFL. This is noted in an analysis done by Sports Illustrated‘s  NFL vertical, The Monday Morning Quarterback

“(The Chargers) will wait out Bosa, who has no options and, therefore, no leverage,” said reporter Andrew Brandt. “They know, as we do, that Bosa will eventually come into the fold,”

So we say good for Joey Bosa’s mom, Cheryl Kumerow Bosa, who fired the first social media salvo in this dispute: 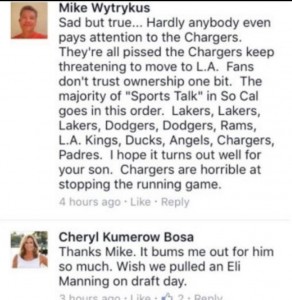 The NFL may be one of the most powerful corporations in the world. But they may yet find out that they are no match for a mother scorned.