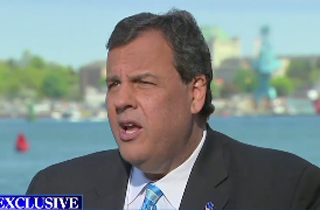 On Monday’s edition of The Kelly File, New Jersey Governor Chris Christie defended his sinking state approval numbers with an explanation so bizarre, that his own state’s newspaper wondered in print whether he’d lost his “marbles.”

The setup: Megyn Kelly asked the GOP governor about a recent poll that showed 65% of New Jersey residents stating that he would make a bad president. “They want me to stay,” he reasoned. “A lot of those people in that 65 percent want me to stay. And I’ve heard that from lots of people at town hall meetings.”

(That is technically true: in a separate question, 64% of poll respondents said they didn’t want him to run for president. But in a followup question, 70% of respondents think he should resign as governor when he starts his presidential bid. So maybe they just want him to go away forever.)

“For months, we have wondered how Gov. Chris Christie thinks he can win the presidency when New Jersey is in such rotten shape after his six years in office,” The New Jersey Star-Ledger said in an op-ed. “Now we may have our answer: The man has lost touch with reality.”

Pointing to his un-handling of the economy, public transit, and Bridgegate, among other things, the Star-Ledger wondered why Christie believed he was beloved. “Maybe he doesn’t believe that himself. That might step on his core pitch about telling the truth, but it would at least tether him to the planet earth.

“The worry is that he really believes it,” they continued. “Politicians like him live in a bubble, surrounded by sycophants. Hard truths have a tough time penetrating.”

Watch the interview that kicked this thing off below, via Fox: