No Internet For 24 Hours: My Unplug Challenge 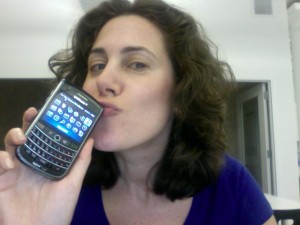 In just under an hour, I will unplug. I will step away from the computer, turn the Blackberry off, tweet a farewell to Twitter and check into The Sabbath on Foursquare, of which I will become the Mayor for 24 very quiet hours.

I am not an unplug person. I like being plugged in. Though various friends and family will disagree, I don’t think I’m too attached to my technology (why wouldn’t I sleep with my Blackberry next to me? It’s my alarm clock AND LIFE PARTNER). In addition to working online, where 90% of everything I do happens via my computer (also safely nearby during slumber), it’s also how I keep in touch with friends and family (I live in a different city than my parents and sis; and despite Mark Zuckerberg’s mealy-mouthed op-ed, Facebook keeps me connected to pals from law school, summer camp, and 6th grade). It’s also, frankly, how I do good: My volunteerism for Robin Hood was on their new media committee; I donate pretty much exclusively online; and I use Twitter and Tumblr to support causes I believe in (Tweet to ReMind for Memorial Day, yo!).

That said — there is a point to Ye Olde Fourth Commandment (Honor the Sabbath and keep it holy, if you were confused and wondering why I was talking about adultery), and I do understand its value. If God can take a breather, then I’m certainly entitled. So I decide to take my turn at The Unplug Challenge posed by The Sabbath Manifesto. Back in March they launched a “Day of Unplugging” for the modern age, which meant a period of refocusing for a day of rest, according to simple tenets like “connect with loved ones” “avoid technology” “avoid commerce” and, a favorite, “drink wine.” (The full list is here.) Drinking wine is never a challenge — and it certainly rarely leads to work! More like falling asleep facedown fully clothed across my bed — but the rest of it, for someone like me, is.

But, I love a challenge. So here goes.

The principles of the Sabbath Manifesto are more like guidelines — just like you’re not expected to, say, slaughter a goat like they did in the Bible, so too is this not meant to turn one into a super-strict Orthodox Jew overnight. Rather, the principles are meant to inspire and guide. The Sabbath Manifesto was cooked up by Reboot, which the NYT described as “a nonprofit think tank of hip, media-savvy Jewish professionals,” and of which I am a slightly less-hip part. I agreed to be an unplug guinea pig, following in the footsteps of Time’s Joel Stein and How I Met Your Mother’s Josh Radnor, and, after checking in with the Sabbath Manifesto machers, came up with my own list of rules:

Beyond that, we’ll see how I’ll do. 24 hours might not seem like a big deal, but I was looking forward to getting a lot done this weekend and had to think hard about this before agreeing to give up that time. But it’s not like I don’t have a copy of The Bridge: The Life and Rise of Barack Obama waiting at home. Or that Vanity Fair with the hot shirtless soccer players on the cover. I’ll be fine.

So — I guess I’ll see you on the other side. Happy Memorial Day weekend and — Good Shabbos! Oh that reminds me, Entertainment Weekly — you totally forgot Walter Sobchak. He doesn’t roll on Shabbos, either.