North Korea Expert: The Interview ‘Gets a Lot Right’ About North Korea

North Korea Expert: The Interview ‘Gets a Lot Right’ About North Korea 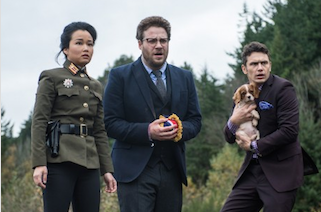 On Friday, Seth Rogen retweeted a link to this New Yorker online piece by the Los Angeles Times’ Beijing bureau chief Barbara Demick titled “A North Korea Watcher Watches ‘The Interview.’” After weeks of critics describing his comedy film-turned-international crisis as nothing more than silly entertainment, there must have been something he liked about an expert on North Korea saying the filmmakers “get a lot right” about their subject.

Warning: some spoilers below if you haven’t yet coughed up the $5.99 to stream the film.

Demick, author of Nothing to Envy: Ordinary Lives in North Korea

who also wrote about a North Korean defector for The New Yorker in 2009, writes in her new piece that the opening scene of The Interview, in which a young girl sings a song with the lyrics “Die, America, Die,” “perfectly captures the anti-American propaganda in a country where kindergartens, according to the A.P., feature posters of schoolchildren bayonetting a bloodied U.S. soldier.” She also references a song taught in schools there titled “Shoot the Yankee Bastards.”

On Rogen and James Franco’s journey to and arrival in North Korea, Demick adds, “From the airplane’s interior, with its lace-doily-backed seats, to the protagonists’ lavishly appointed guesthouse, the atmospherics ring true. First-time visitors to North Korea are always surprised that such a poor country can provide comfortable accommodations and abundant food when it wants to make a good impression.”

She goes on to cite the “troupe of semi-clad dancers” who entertain the protagonists as having their basis in the real-life gippenjo or “pleasure brigades” assigned to North Korea’s leaders. And that fake grocery store that makes Franco’s character see Kim Jong-un for the manipulator that he is? Demick writes:

Here the movie is effectively playing with the contrast between illusion and reality in the country. Visitors to Pyongyang in the famine years of the nineteen-nineties used to describe supermarkets that displayed plastic produce. (These days, Pyongyang has several expensive foreign-currency shops.) And the capital is often described as a large Potemkin village, an elaborate stage set designed to fool outsiders into believing that North Korea is as rich and powerful as its propaganda claims.

“From my viewpoint, what the film gets most right is the psychology of North Korea,” Demick concludes.
The regime is held together by the myth that members of the Kim family are gods, ruling by divine providence.” She even mentions the “pee and poo” joke that so bothered Vox’s Max Fisher as evidence.

The fews “factual errors” that Demick does point out? For one, she says there are likely no Siberian tigers wandering around outside the palace in Pyongyang. And, she notes, Kim Jong-un is “played by the much too handsome Randall Park.”

Read the full article at newyorker.com.