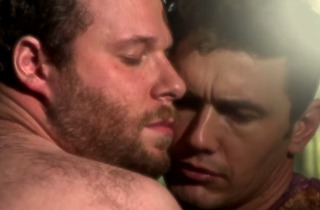 Just let that sink in for a second.

The stars of Pineapple Express and This Is the End have been condemned by North Korea.

See, the two actors have teamed up for a new movie called The Interview, in which they play celebrity journalists who score an interview with Glorious Leader Kim Jong Un, and then the government enlists them to assassinate him instead. Hijinks, presumably, ensue.

But a spokesman for Kim Jong Un has made it clear they are not happy at all about this film.

“There is a special irony in this storyline as it shows the desperation of the US government and American society,” he told The Telegraph.

“A film about the assassination of a foreign leader mirrors what the US has done in Afghanistan, Iraq, Syria and Ukraine,” he added. “And let us not forget who killed [President John F.] Kennedy – Americans.

“In fact, President [Barack] Obama should be careful in case the US military wants to kill him as well,” Kim Myong-chol said.

However, the Glorious Leader, he said, will probably check out the movie anyway. And Rogen is looking forward to what he thinks of it.

(Sidenote: wouldn’t it be hilarious if Seth Rogen and James Franco end up causing an international crisis?)

You can watch the teaser trailer for The Interview below: