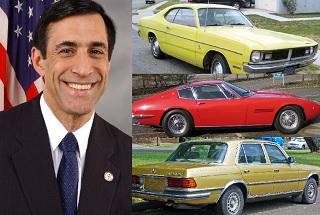 Plouffe was responding to Issa’s “paid liar” attack on Jay Carney, but his tweet might make people wonder how a guy gets elected to the U.S. Congress after being accused of car theft… three times. Here’s how.

It should be noted that David Plouffe is not a journalist, but if he were, his tweet would be considered a massive breach (or not), because it implies guilt where it hasn’t been established. Darrell Issa was never convicted of auto theft, or any of the other things Plouffe tweeted about, but it is fascinating that, in an age where an errant scream can sink your electoral chances, a candidate could survive three accusations of auto theft, including two indictments.

The first alleged theft occurred in 1971, and did not result in an arrest or charges. Here’s what First Sergeant (Ret.) Jay Bergey told The San Francisco Chronicle in 1998:

“That kid stole my car out of the parking lot and took it to Cleveland, and I knew he did it,” said retired 1st Sgt. Jay Bergey, who served with Issa in 1971 on the 145th Ordnance Detail, an Army bomb squad stationed near Pittsburgh.

“I confronted Issa. . .. . I got in his face and threatened to kill him, and magically my car reappeared the next day, abandoned on the turnpike,” the retired soldier said in a phone interview from his home in Pennsylvania.

…According to Sgt. Bergey, the alleged auto theft occurred shortly before Christmas in 1971.

Bergey said he had been sent on short notice to eastern Pennsylvania to dispose of ammunition. When he returned the next day, he said, the car was missing.

Bergey said only a few soldiers knew of his overnight assignment. He said he concluded that Issa had stolen the car, driven it 150 miles to Cleveland and then returned to the barracks.

At the time a 15-year veteran who had served in Vietnam, Bergey said he confronted the teenage soldier.

“I told him I was going to kill him if I didn’t get my car back,” Bergey said. He said Issa denied stealing the car, but soon after, the car was found abandoned less than a mile away.

That’s pretty thin, but Bergey went on to tell the paper that Issa’s mother “basically admitted that my car had been in Cleveland,” and that she told him “Issa had claimed to have purchased the vehicle,” according to the paper.

When Issa was asked about Sgt. Bergey’s allegation in 2011, he went on the attack, telling The New Yorker‘s Ryan Lizza “I can’t believe (Sgt. Bergey) ended his career as a medium-rank sergeant with an alcohol problem,” and added, “Did I steal his or anyone’s car? No. Did I have anything to do with it and do I know whether somebody else stole it or he simply left it in a drunken stupor? I’d have to go check. I didn’t.”

Issa’s second auto theft allegation happened in 1972, and did result in an arrest and charges, which were later dropped:

On March 15, 1972, three months after Issa allegedly stole Jay Bergey’s car and one month after he left the Army for the first time, Ohio police arrested Issa and his older brother, William, and charged them with stealing a red Maserati from a Cleveland showroom. The judge eventually dismissed the case.

…The incident involving the Maserati was a case of mistaken identity, he said. “By the time I get home in ’72, my brother has been incarcerated,” he said. “Cleveland Heights is a pretty small town. He was arrested and sent off to juvenile detention for a year and now he’s back on the street, and the police stop us. We’re about a thousand feet away, but walking in a direction toward this car. And they put two and two together: ‘Hey, car sitting in the middle of the road and two guys walking toward it and one of them’—Billy had never been arrested for car theft, but he’d been arrested for other thefts. Eventually, they put together the, quote, eyewitness with us and we don’t match and the case is dismissed.”

That same year, Issa ran into trouble in another car that wasn’t his, this time for having a gun in his glove compartment. The car, and the gun, were his brother’s, and Issa claimed he didn’t know the gun was in there, and that there were no bullets. However, Lizza reported, the police report said that “there was a loaded clip and a box of ammo, and that Issa told the police that he was allowed to carry the gun and that he needed to protect his car.”

Taking Issa at his word (and why wouldn’t you?), you would think that, after his brother’s past had just gotten him arrested, Issa would be a little more careful about borrowing his car, or anything, from him. Apparently, that lesson didn’t sink in, as Darrell would go on to be arrested again, for something he says his brother did:

According to court records, on December 28, 1979, William Issa arrived at Smythe European Motors, in San Jose, and offered to sell Darrell’s car, a red 1976 Mercedes sedan. William was carrying an Ohio driver’s license with his brother’s name on it and the dealer gave William a check for sixteen thousand dollars, which he immediately cashed. Soon afterward, Darrell reported the car stolen from the Monterey airport. He later told the police that he had left the title in the trunk.

The brothers had been together in Cleveland for Christmas, and, after Darrell gave a series of conflicting statements about his brother and whether he himself had recently obtained a second driver’s license, the investigator in the case became suspicious that the two men had conspired to fraudulently sell Darrell’s car and then collect the insurance money.

The brothers were indicted for grand theft. Darrell argued that he had no knowledge of William’s activities; William claimed that his brother had authorized him to sell the car, and he produced a document dated a few weeks before the robbery that gave him power of attorney over his brother’s affairs. On February 15th, with the investigation ongoing, Darrell returned to the San Jose dealership and repurchased his car, for seventeen thousand dollars. In August, 1980, the prosecution dropped the case. Darrell insisted that he was a victim, not a criminal. William had produced evidence that he had the legal authority to sell the car, and the injured party was reimbursed.

I’ve heard of “3 strikes” laws, but in Issa’s case, it seems he’s racked up three balls, each of which earned him a walk.

The “car thief” appellation gets thrown at Issa frequently by opponents, but given that these allegations are all smoke, news consumers should take all of the facts into consideration, and not just go with what their gut tells them.