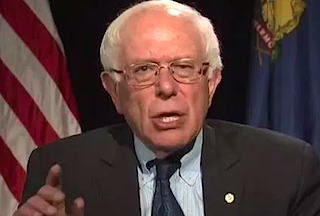 When Rehm said his named appeared on some sort of list she received, Sanders replied, “That’s some of the nonsense that goes on in the internet. But that is absolutely not true.” Later, he added, “I get offended a little bit by that comment, and I know it’s been on the internet. I am obviously an American citizen and I do not have any dual citizenship.”

As the Jewish Journal reported, Sanders’ name does appear on various online lists of U.S. members of Congress with dual Israeli citizenship, but the sources are non-existent and appear to have originated from “anti-Semite and anti-Zionist” activists.

Sanders is Jewish and reportedly spent several months living and working on a kibbutz there after he graduated from college. Last summer, the senator faced off with constituents at a Vermont town hall who objected to his defense of Israel’s aggressive attacks on Hamas in Gaza.

On today’s show I made a mistake. Rather than asking Senator and Presidential Candidate Bernie Sanders whether he had dual U.S./Israeli citizenship, as I had read in a comment on Facebook, I stated it as fact.

He corrected me, saying he did not know where the question came from. I apologized immediately.

I want to apologize as well to all our listeners for having made an erroneous statement. I am sorry for the mistake. However, I am glad to play a role in putting this rumor to rest.