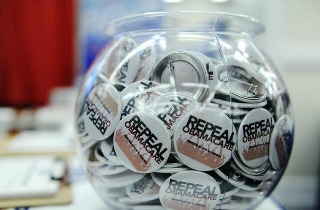 Last week, leading Democratic pollster Celinda Lake warned her fellow Democrats to ignore the pundits advising vulnerable incumbent Democrats to embrace the Affordable Care Act. She told them to campaign instead on the flaws in the law, the Democratic Party’s plan to address those flaws, and against the Republican Party’s advocacy for the pre-ACA health care delivery system.

But Lake’s advice had already been tested in a real-world electoral environment, albeit an unrepresentative one, in Florida’s special congressional election in early March. Former gubernatorial candidate Alex Sink ran the prototypical “fix it, don’t nix it” campaign and ran television ads along the lines Lake recommends in which she castigated her GOP opponent seeking to go back to a system in which insurance companies could deny coverage. She lost.

Since Rep. David Jolly‘s (R-FL) come-from-behind victory in Florida’s 13th, a cottage industry of punditry has sprung up in which members of both political parties warn that the GOP may not be best served by campaigning against the ACA alone. However, a National Public Radio poll released Thursday indicates that the GOP’s anti-Obamacare strategy may be right on the money after all.

The NPR survey, conducted from March 19 – 23 of 840 likely voters with a sample 6 points more Democratic than Republican by the GOP firm Resurgent Republic and the Democratic firm Greenberg, Quinlan, Rosner, revealed that a “Republican midterm wave” is brewing.

“The overall political environment in 2014 resembles 2010 far more closely than 2012,” the survey’s release reads. “[A]s of today the chances are better than even that they will take control of the Senate and add to their majority in the House in 2014.”

They cited a number of factors which are creating major headwinds for Democrats, including the president’s ailing approval rating, the sluggish economic recovery, and pessimism about the future of the country. And, as always, a wave election is made up of a combination of factors. However, there most certainly is one key factor motivating Republicans to vote in disproportionate numbers compared to their Democratic counterparts. What could that be?

“For the first time in NPR polling, a majority of voters disapproves of the health care law,” the Resurgent Republic’s release continued. Oh.

While the NPR poll finds that only 51 percent to 47 percent disapprove of the law, the vast majority of recent public polls show the ACA to be underwater by more than 10 points, sometimes by more than 15 points.

However, Lake’s warning to Democrats continues to hold sway with pundits and campaign professionals, in part because of the results of surveys like this. The poll tested two messages, one a standard GOP criticism of the law and the other a boilerplate Democratic anti-ACA repeal message.

The poll’s release does, however, note that independents favor the GOP message on the ACA by 42 to 33 percent. Resurgent Republic observes that, if the Republican Party were able to assuage voters’ concerns that their alternative to the ACA would not be the status quo ante Obamacare, the party might be able to secure even more support ahead of November. That articulated alternative could also, however, become a liability as it is scored, picked apart, and polarized.

This poll’s findings indicate that the ACA is as much of a liability for Democrats as it was in 2010. Though the electorate remains concerned about the lack of GOP alternatives to the law, just as they were in Florida’s 13th, voters’ fears about the health care law are leading them to gamble on the party that promises to alter it radically.