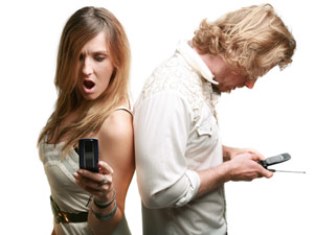 According to Pew Research, the number of Americans getting hitched these days is at an all-time low (51 percent of all adults in 2011, compared to 72 percent in 1960). This unsurprisingly isn’t just a blip…the number has been trending down for years.

Many professionals have theories on this drift. I’m no expert, I’m just a guy…but a guy who isn’t far enough removed from single life to not remember what it was like, and one who still has enough friends living in that world to get current reports from the ground. As an added bonus, up until recently I lived in Hoboken for more than 15 years, a saloon town (it once held the Guinness Book record for most bars per square mile in the U.S.) that CNN once deemed as the best place for singles over 30 to live in the country.

So what’s a story like this doing on Mediaite? Because my theory on why singles are staying single (despite many in their 30s looking to join the ranks of the attached) primarily focuses on the pitfalls of social media, particularly in terms of relative strangers communicating with each other in the courting stage. The theory will also address the NSA scandal and the collective shrug around the government accessing phone records of its citizens (a solid majority–56 percent–of those polled by the Washington Post/Pew Research find the NSA’s actions “acceptable”).

But first, let’s explore the whys around the steady drop in married couples. We’ll connect the dots back to the NSA apathy later. And yes, this connection is actually happening. Get your popcorn ready…

So why can’t the unattached—the ones who have declared being sick of the bar scene, 8-minute dating, 27 levels of compatability via online matchmakers, and being set up by friends (who apparently have lost all sight and sanity)—get hitched for good?

A few exceptions aside, the answer is simple: TMI (yes, another acronym). Too much information. Too much on your Facebook page, too many Tweets from your Twitter account. And way, way, way too much communication that isn’t face-to-face in general.

But more communication is a good thing, right? The more ways for us to express ourselves, the better.

Actually, if experience and stories relayed on from single troops on the front lines are any indication, the more ways for us to express ourselves, the bigger the opportunity to screw up a good thing.

To make the point, let’s use two hypothetical examples from 1997 and today:

1997: Jack meets Jennifer at a local watering hole through mutual friends. Jack and Jen have quality, quick-witted Sorkin-esque dialogue right out of a grating scene on The Newsroom. Jack thinks Jen is esthetically pleasing; Jen feels Jack should be cast on True Blood , which apparently is a huge compliment.

Jack gets Jen’s phone number and writes it on a cocktail napkin (putting a number immediately into a phone in front of the number-provider was seen as off-putting back then). And Jen’s number will not be used to text (since very few people did that in ‘97), but to actually, you know, call and have something called a conversation free of emoticons and acronyms (both bring any guy down 4-to-17 notches on the mystery/respect scale). So after waiting the requisite 2-3 days (to keep the aforementioned mystery/respect aspect intact), Jack calls Jen to ask her out on the following Friday and don’t speak, text, IM or communicate in any fashion before then, which only builds anticipation (another lost art).

They now have twins and resemble the 90210 Walshes (sticking with the 90s theme).

2013: Jack 2.0 sees Jennifer 2.0’s photo on a mutual friend’s Facebook post. Jack thinks Jennifer is esthetically-pleasing and decides to dig further. And thanks to Jen not setting her Facebook settings to private, Jack learns everything about Jen’s life in about 14 minutes.

Hometown? Check. School? Check. Pictures with other guys who may or may not be ex-boyfriends? Check. That night she got overserved and a friend took a picture of her being wheeled home in a Shop Rite shopping cart? Check. Where she shops? Check. Who she voted for? Check.

Really, who needs the NSA?

Jack thinks Jen is cute, sure, but he’s conflicted. For starters, he’s a Republican (not die-hard, but enough to debate a Democrat like Jen over dinner if given the chance). And she appears in tons of photos with other guys (234 posted overall). Is she morally handicapped?

Time to dig more, he thinks to himself…so he proceeds to read her LinkedIn profile.

Wait…she was unemployed for 11 months? What happened? Is she irresponsible? A drunk who can’t hold a job? And who works at Enron and puts that on a resume?

But that info still isn’t enough: Jack then goes to her Twitter account, where, you know, people can express themselves so effectively in 140 characters or less. And after studying who and what she follows, reading her last 20 tweets and even judging the way her bio is written, Jack is almost convinced he shouldn’t try to date her at all.

But opposites attract, he tells himself, and proceeds to walk over to the Turtle Club, where she just posted a photo of her friends seven minutes ago, complete with her exact location.

Jack is introduced to Jen via the aforementioned mutual friend and the two hit it off well. But Jack is only at an advantage by doing what Bill Murray did to Andie McDowell in Groundhog Day: Acting like he loved the same things she did (based on prior knowledge she doesn’t know he has) and creating commonalities that otherwise didn’t exist.

At the end of the night as the two go their separate ways following a long embrace, Jack texts Jen five minutes later to say he had a fun night. Benign enough. The next morning, he decides to follow her on Twitter and sends a Facebook friend request. A little aggressive, she thinks…but whatever.

However, the next day, a Saturday, Jack goes out with his friends in Manhattan. Four shots of something ending in “‘Haus” and copious amounts of alcohol later, the filter is off and sound judgment is numb. And that’s when the texts start flowing.

First, he tries to contact Jen via regular text to see if she wants to meet up later (Jen has some self-respect and would prefer a formal date first, thereby making this is a bad move).

Impatient (because many can’t handle not having a text returned in under 16 minutes), he proceeds to sends a private message via Facebook, where a green light indicates she’s currently online (although in reality, she’s away from her open computer/browser). To make matters more confusing, Facebook also provides the sender a time-stamp of when a private message is seen.

Either way, this can drive a self-doubter like Jack mad: If Jen has read the message but doesn’t respond, does that mean she isn’t interested? And if she hasn’t read it, does that mean she’s out with another guy, maybe even one from all those photos in her Costa Rica 2012 Getaway! album on her Facebook page?

Growing more insecure by the minute, Jack gathers a few fetching girls at the bar and asks to have his picture taken with them. And in an effort to make Jen jealous (even though they haven’t been on one date yet), he posts the photo on Twitter and his Facebook wall, which can now be seen on her News Feed. He then checks her Match.com profile, which indicates she’s been “active” in the past 24 hours, which must mean she’s already moved on.

Jen, who’s been driving back from dinner at her parents that night, absorbs all the horror now in her text messages, Facebook and Twitter accounts upon getting home (she recently got into a fender-bender while driving and reading her phone, and vowed never to do so again). She then declares to her roommate, “This guy may look good, and we may have had a decent conversation, but he’s obviously an anxious, unconfident control freak. What will he act like if I actually became his girlfriend? Thanks but no thanks.”

So what does this scenario have to do with the serious stuff that is the NSA scandal? Well, again, according to that Washington Post/Pew poll, 56 percent of all Americans see the agency accessing call records of millions of Americans through secret court orders as “acceptable”. Apparently a majority don’t think it’s a very serious revelation at all…

And that 56 percent number is likely higher for those in the key 25-54 demo–people like Jack and Jen–only because most in that age group already have information about all aspects of their lives on display for anyone—from the government to potential suitors–to see and absorb, anyway.

And besides, who even makes phone calls these days? Many young adults (and not-so-young adults) solely communicate via IM and text.

Whether it be finding a soul mate and/or broadcasting our lives through social media, one acronym has risen above all the scandalous rest….and it ain’t NSA, DOJ, IRS or EPA.