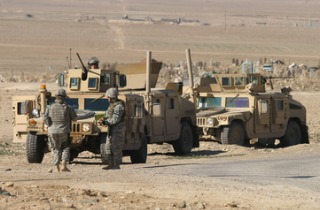 A New York Times investigation has revealed that the U.S. government seemingly misled the media, suppressed witness testimony, and covered up its discovery of thousands of chemical munitions in Iraq, including ones used by insurgents in IEDs against coalition forces.

After the terrorist attacks of Sept. 11, 2001, Mr. Bush insisted that Mr. Hussein was hiding an active weapons of mass destruction program, in defiance of international will and at the world’s risk. United Nations inspectors said they could not find evidence for these claims.

Then, during the long occupation, American troops began encountering old chemical munitions in hidden caches and roadside bombs. Typically 155-millimeter artillery shells or 122-millimeter rockets, they were remnants of an arms program Iraq had rushed into production in the 1980s during the Iran-Iraq war.

All had been manufactured before 1991, participants said. Filthy, rusty or corroded, a large fraction of them could not be readily identified as chemical weapons at all.

From 2004 to 2011, documents obtained by the Times show the discovery of almost 5,000 chemical munitions scattered around Iraq, including rounds containing mustard and sarin agents, mixed in with conventional stockpiles, buried for decades, sealed in forgotten bunkers, or, in one case, abandoned in a shipping container in an former US military base.

At least 17 American and seven Iraqi troops were injured during the war after encountering chemical weapons, either disposing of arms caches or defusing IEDs. According to these soldiers, they were ordered not to reveal the nature of their injuries to other soldiers or even their families.

The military even kept information about their injuries from military doctors caring for the wounded. Treatment was cursory at best, and Purple Hearts were denied for many of those injured.

The chemical weapons were all manufactured before the first Gulf War, too degraded to be used as intended in conventional military action –- highlighting the false invasion rationale of an active Iraqi WMD program -– but too dangerous to be left lying around:

Participants in the chemical weapons discoveries said the United States suppressed knowledge of finds for multiple reasons, including that the government bristled at further acknowledgment it had been wrong. “They needed something to say that after Sept. 11 Saddam used chemical rounds,” Mr. Lampier said. “And all of this was from the pre-1991 era.”

Others pointed to another embarrassment. In five of six incidents in which troops were wounded by chemical agents, the munitions appeared to have been designed in the United States, manufactured in Europe and filled in chemical agent production lines built in Iraq by Western companies.

The munitions were manufactured in the 1980s during the Iran-Iraq War, when the United States was allied with the Ba’athist regime against the Iranian Revolution. Iraq received help from chemical companies and arms manufacturers in in the West. American firms sold mustard agent precursor to the Hussein regime, while German companies built four huge chemical plants in Iraq to produce other precursors. Italian, Spanish, Belgian, and Egyptian firms sold Iraq tens of thousands of empty aerial bombs, artillery shells, and rockets to fill with nerve and blister agents.

Because of the truly massive stockpiles created in the 1980s –- by the end of the conflict with Iran, Iraq was making 900 metric tons of mustard agent a year -– many such weapons survived the Gulf War and U.N. disarmament in the 1990s.

Some on the right (deep in denial about the U.S. role in devastating that part of the world) will argue that the bare fact that Iraq had any chemical weapons at all proves it was inherently a threat to the United States and had to be disarmed. But as the Times notes: After almost a decade of American occupation, even the United States failed to find and destroy all of Iraq’s old weapons stockpiles. According to the Iraqi government, this summer, about 2,500 corroded chemical rockets still remained in a compound overrun by the Islamic State.

Expect neoconservatives and hawks to endlessly crow about this report, as though it rehabilitates the reputation of the administration that dragged the U.S. into a disastrous war. But no amount of ancient, decaying weaponry will paper over the false claims of active chemical, biological, and nuclear weapons programs.

Nor does fear-mongering about such degraded weapons falling into ISIS’s hands justify the current intervention in the region. They weren’t a cause for war then, and they’re not a cause for war now. Please, conservatives, learn at least one lesson from the last three decades.

— —
>> Daniel Bier is the publisher and executive editor of The Skeptical Libertarian. Follow him on Twitter here.