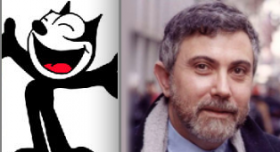 Blog fights are not just for the Tumblrs, even Nobel prize winning economists/columnists are susceptible! Behold NYT‘s Paul Krugman, who reacted with shock and surprise (as did mostly everyone) to Niall Ferguson‘s lede in a FT article last week, which said President Obama was like Felix the Cat: “Felix was not only black. He was also very, very lucky.”

Upon reading this a non-plussed Krugman wanted to know where the FT editors had disappeared to. Then, after Ferguson posted a response to the debacle on HuffPo — he was shocked, shocked! at the public’s response — Krugman called him a whiner. Ha!

Now this. Ferguson has apparently demanded that Krugman print a further response from him. And he has:

As you both took exception to my comparison of the President with Felix the Cat, my favorite cartoon character, implying it was racist and recommending I consult Professor Henry Louis Gates Jr., I have now done so. He has taken the trouble to consult others in the field of African-American Studies, including our colleague Lawrence D. Bobo, the W. E. B. Du Bois Professor of the Social Sciences, and has written to me as follows:

“None of us thought of Felix as black, unlike some of the racially-questionable caricatures Disney used. Felix’s blackness, like Mickey’s and Minnie’s, was like a suit of clothes, not a skin color. … You are safe on this one.”

Professor doth protest too much! By simply removing this “Felix was not only black” the comparison would not have caught the eye at all. As it stands to suggest that the comparison didn’t have something to do with race seems intentionally ignorant. But wait! That is not the best part. Krugman’s response is by far the best thing to come out of this.

What can I say? While the Ferguson line was deeply offensive — everyone I know asked, “Did he really write that? Did the FT actually publish it?” — it never occurred to me that it had anything to do with the question of whether Felix the Cat was supposed to be African-American. The mind reels.

For the record, I don’t think that Professor Ferguson is a racist.

I think he’s a poseur.

I’m told that some of his straight historical work is very good. When it comes to economics, however, he hasn’t bothered to understand the basics, relying on snide comments and surface cleverness to convey the impression of wisdom. It’s all style, no comprehension of substance.

And this time he ended up choking on his own snark.

Oh snap! Business Insider calls Krugman a great blogger, we think this is perhaps the sort of fun, sharp British journalism whose absence over here James Warren was lamenting yesterday. Now if only Maureen Dowd would learn to Twitter.