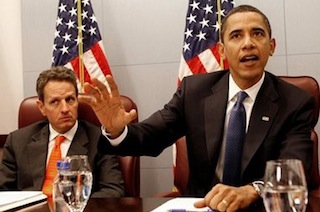 Fans of economic policy may recall that during one of the many recent debt ceiling showdowns, the idea to mint a trillion-dollar platinum coin came to the fore. It turns out that the Obama administration took the idea seriously enough to have the Justice Department’s Office of Legal Counsel draft memos pertaining to its legality, a fact belied by the White House’s out-of-hand dismissal of the option in January.

In response to the Huffington Post’s Freedom of Information Act request, the OLC confirmed that memos about the legality of minting a high-value platinum coin had been written since Obama took office, but declared them “not appropriate for discretionary release.” HuffPost filed the FOIA request during this fall’s debt ceiling battle.

RELATED: This Is The Greatest And Best Trillion Dollar Coin In The World… Tribute

The #MintTheCoin movement began in late 2012, when raising the debt ceiling was once again the subject of congressional brinksmanship. Basically, a legal loophole allows the Secretary of the Treasury, Tim Geithner at the time, to mint platinum coins for any amount. If the GOP had successfully blocked the raising of the debt ceiling, the Treasury could have minted a trillion-dollar coin, deposited it in the Federal Reserve, and used the value to pay out on the government’s obligations without congressional spending authorization—simultaneously avoiding default and eradicating Republicans’ leverage in debt negotiations. (Under one theory, President Barack Obama could have traded the authority to mint coinage in exchange for raising the debt ceiling, making this a one-off solution.)

The #MintTheCoin movement enjoyed some support, partially due to its novelty, as people bandied about whose face would appear on the coin and so forth; it even started a mini-feud between Jon Stewart and Paul Krugman. But the administration said at the time that the coin was “no substitute for Congressional action,” and the Treasury ruled out the coin as an option in mid-January.