Obama On Hilary Rosen Comment: ‘I Don’t Have A Lot Patience’ For ‘Commentary’ About Candidates’ Spouses
video

Obama On Hilary Rosen Comment: ‘I Don’t Have A Lot Patience’ For ‘Commentary’ About Candidates’ Spouses 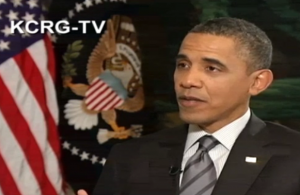 President Obama, too, has weighed in on the Hilary Rosen controversy, disagreeing with the remarks Rosen made about Ann Romney. There’s “no tougher job than being a mom,” he said. The president further added, “I don’t have a lot of patience for commentary about the spouses of political candidates.”

In an interview with ABC’s Cedar Rapids affiliate KCRG, Obama rejected Rosen’s comment. Reflecting on his own mother and wife, Obama said anybody who doesn’t think there’s “no tougher job than being a mom, I think, probably needs to rethink their statement.”

The president went on to add that he does not have much patience “for commentary about the spouses of political candidates.” Those in the public life, like himself and Mitt Romney, are “fair game,” he said. But candidates’ families are “civilians.” From ABC News:

“My general view is those of us who are in the public life, we’re fair game. Our families are civilians,” he said. “I haven’t met Mrs. Romney, but she seems like a very nice woman who is supportive of her family and supportive of her husband. I don’t know if she necessarily volunteered for this job so, you know, we don’t need to be directing comments at them. I think me and Governor Romney are going to have more than enough to argue about during the course of this campaign.”

Take a look at his comments, via KCRG-TV: