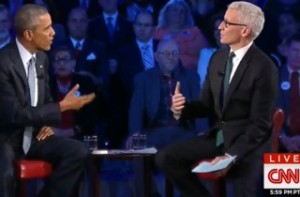 President Barack Obama appeared on CNN to chat with Anderson Cooper about his recent action on gun control last night and it was clear that he has had enough of people claiming he has a “secret” desire to “take everyone’s guns.” The live televised town hall event featured a rotating cast of notable individuals asking questions of the President’s stance on gun control.

Visibly frustrated, Obama questioned why there is so much division between parties and groups when it comes to guns and everyone postulates about his hidden agenda after mass shootings, but when he tries to reform the pharmaceutical industry to keep dangerous pills away from the public, no one ever accuses him of “trying to take everyone’s drugs.”

“There is this notion of a conspiracy out there, and it gets wrapped up in concerns about the federal government. There’s a long history of that; it’s in our DNA. The United States was born suspicious of some distant authority,” he conceded, careful not to completely condemn his detractors.

Cooper asked if it was fair to call this distrust a conspiracy. “Are you suggesting that the notion that we are creating a plot to take everyone’s guns away so we can impose martial law is [not] a conspiracy? Yes, that’s a conspiracy!” Obama hit back.

Regarding his plan to steal every American gun owner’s possessions, he stated, “I’m only going to be here another year. When would I have started on this enterprise?” He even points out that most people associate his time as an Illinois Senator with Chicago, but in the southern part of the state, the majority of his old constituents hunted and owned guns that he never endeavored to take away.

“It is a false notion that I believe is circulated for either political reasons or commercial reasons in order to prevent a  coming together among people of good will to develop common-sense rules that will make us safer while protecting the second amendment,” concluded the President.