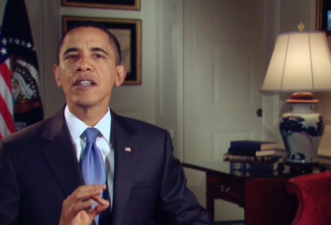 President Obama used his weekly public address for January 23rd to sidestep the media and hit the Supreme Court directly, calling this week’s 5-4 ruling on campaign finance reform “a victory” for lobbyists, opening “the floodgates for an unlimited amount of special interest money into our democracy.” Citing his own “historic reforms” to limit the shady “power to tilt the tables,” the President railed against the Court and spoke of repairing “the damage that has been done.”

“Any public servant who has the courage to stand up to the special interests and stand up for American people can find himself or herself under assault come election time,” said the President of the Court’s decision to overturn the bipartisan McCain Feingold campaign finance reform bill. Obama’s Saturday criticisms will likely set the stage for an administration-led counter attack on Sunday’s news shows where Democrats will attack the Court’s ruling in an attempt to gain the people’s favor in the wake of Martha Coakley’s loss in Massachusetts.

Obama referred to the White House as the “People’s House” and said he could not “think of anything more devastating to the public interests” than overturning a century’s worth of law. He went on to cite energy independence, health care reform and warn that now “foreign entities can mix in our elections.” He referenced Republican president Teddy Roosevelt and promised to “get to work immediately willing to develop a bipartisan response to this decision.”

The address represents a probable media blueprint for a new, populist-tinged strategy, in the form of an offense push, to regain favor for his party and presidency. See the clip below: