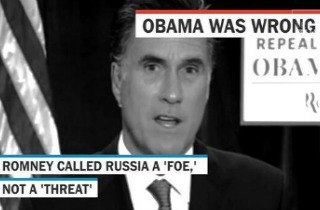 In March of 2012, The Washington Post fact checker Glenn Kessler took on a controversial claim made by GOP presidential nominee Mitt Romney who said that Russia had positioned itself as America’s “number one geopolitical foe.” Unable to accurately check this broad claim, Kessler narrowed his review of the facts to Romney’s assertion that Russia “lines up with the world’s worst actors” and uses its veto power in the United Nations Security Council to protect them.

Kessler noted that UNSC vetoes have been sparing in the years immediately preceding this comment, and that Russia in particular had used that power four times since 2004 — and only once “over a matter of self-interest.” That “self-interest” happened to be Moscow’s desire to block U.N. observers from entering the Republic of Georgia after Russia invaded that country in August, 2008.

“We’re still not sure why Romney singled out Russia,” Kessler wrote. “The Russians may be tough negotiators, but there’s nothing wrong with that. And certainly, it’s better than the days of the Soviet Union, which frequently cast vetoes.”

But, on the evening of March 19, nearly two years after this original verdict was issued, The Washington Post took another look at the issue. This time, they took on President Barack Obama and the rhetoric he used while attempting to make Romney look backwards and misguided during an October, 2012 presidential debate.

While The Post noted that there was a distinction between a “foe” and a “threat” in 2012, they did not render a verdict on the veracity of Obama’s claim.

The Post closed ominously with Obama “zinging” Romney by saying “The 1980s are now calling to ask for their foreign policy back.” They displayed a series of headlines from popular publications like POLITICO, Business Insider, Fox News, and the Global Post all conceding or reveling in how deeply that line cut Romney. “Obama’s zinger was considered clever at the time,” The Post observed with a discernible note of regret.

They declined to render a verdict on how well that line has held up in the ensuing years.

Going back to partially correct the record is good, but it comes years too late to be of value to the voters who were underserved by the media and “fact checking” establishment in 2012. 18 months later is 18 months too late to take a critical eye to Obama’s “clever” line.