Obama: ‘You Didn’t Elect Me To Read The Polls And Figure Out How To Stay In Office’ 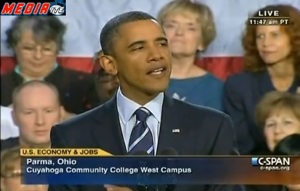 President Obama gave an impassioned speech on the economy today in Parma, Ohio, and seemed to not only go after his GOP adversaries, but also addressed his rather bleak poll numbers of late. Sounding at times like his speechwriter was Aaron Sorkin (creator of West Wing), Obama referenced other great Republican presidents like Teddy Roosevelt, Dwight Eisenhower, and yes, even Ronald Reagan, claiming that they were “serious leaders for serious times.” Could this be the renaissance of Barack Obama’s mojo?

As we reported before, the president’s speech can be seen as a kick-off to the coming midterm elections. Addressing middle class tax cuts and cutting the Bush Tax cuts for the wealthy is clearly a major tactic to address the current stagnant economy, and the flailing polls. Transcript of the prepared statement follows the last seven minutes of the President’s speech, embedded below:

I am absolutely committed to fiscal responsibility, which is why I’ve already proposed freezing all discretionary spending unrelated to national security for the next three years. And once the bipartisan fiscal commission finishes its work, I will spend the next year making the tough choices necessary to further reduce our deficit and lower our debt.

Of course, reducing the deficit won’t be easy. Making up for the 8 million lost jobs caused by this recession won’t happen overnight. Not everything we’ve done over the last two years has worked as quickly as we had hoped, and I am keenly aware that not all our policies have been popular.

These values aren’t Democratic or Republican. They aren’t conservative or liberal values. They’re American values. As Democrats, we take pride in what our party has accomplished over the last century: Social Security and the minimum wage; the GI Bill and Medicare; Civil Rights and worker’s rights and women’s rights. But we also recognize that throughout history, there has been a noble Republican vision as well, of what this country can be. It was the vision of Abraham Lincoln, who set up the first land grant colleges and launched the transcontinental railroad; the vision of Teddy Roosevelt, who used the power of government to break up monopolies; the vision of Dwight Eisenhower, who helped build the Interstate Highway System. And yes, the vision of Ronald Reagan, who despite his aversion to government, was willing to help save Social Security for future generations.

These were serious leaders for serious times. They were great politicians, but they didn’t spend all their time playing games or scoring points. They didn’t always prey on people’s fears and anxieties. They made mistakes, but they did what they thought was in the best interest of their country and its people.

That’s what the American people expect of us today – Democrats, Independents, and Republicans. That’s the debate they deserve. That’s the leadership we owe them.

I know that folks are worried about the future. I know there’s still a lot of hurt out here. And when times are tough, I know it can be tempting to give in to cynicism and fear; to doubt and division – to set our sights lower and settle for something less.

But that is not who we are, Ohio. Those are not the values that built this country. We are here today because in the worst of times, the people who came before us brought out the best in America. Because our parents and grandparents and great-grandparents were willing to work and sacrifice for us. They were willing to take great risks, and face great hardship, and reach for a future that would give us the chance at a better life. They knew that this country is greater than the sum of its parts – that America is not about the ambitions of any one individual, but the aspirations of an entire people and an entire nation.

That’s who we are. That is our legacy. And I’m convinced that if we’re willing to summon those values today; if we’re willing again to choose hope over fear; to choose the future over the past; to come together once more around the great project of national renewal, then we will restore our economy; rebuild our middle-class; and reclaim the American Dream for the next generation.

Thank you, God Bless you, and may God Bless the United States of America.