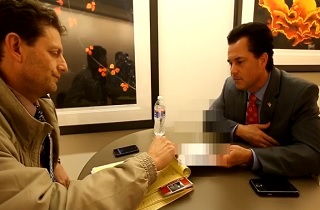 Sometimes, the apple doesn’t fall far from the tree, but then it takes a weird bounce. Dr. Milton Wolf, health care-reforming radiologist and second cousin to President Obama, is currently defending himself over Facebook posts in which he uploaded x-rays of fatally wounded gun victims, and participated in joking commentary about them. Dr. Wolf, also a candidate for the U.S. Senate, explained to reporter Tim Carpenter that joking about a patient who was nearly decapitated by a shotgun blast was “educational.”

The Facebook postings, from 2010, included x-rays of fatally wounded gunshot victims, and joking comments from Wolf. For example, in one case, he asked “What kind of gun can blow someone’s head off completely? I gotta get one of those.”

In an unbelievable eight-minute interview with The Topeka Capitol Journal‘s Tim Carpenter, Wolf defended his actions as “educational,” and somehow related to the “burden that you carry when you’re a doctor,” along with a set of ever-more-bizarre deflections and evasions:

Carpenter also contacted the hospital that Wolf referenced in the interview:

Truman Medical Centers in Kansas City, Mo., where Wolf said he obtained the decapitation X-ray, said in response to an inquiry Friday it wouldn’t have granted Wolf permission to use images of a shooting victim in this manner. Officials at Shawnee Mission Medical Center, linked to X-rays on the Internet depicting a person embedded with shotgun pellets and marked as property of TheWolfFile.com, responded to inquiries Friday by revealing Wolf had pledged to request removal of the X-rays from a California political website.

The controversy has drawn strong denunciations from Republican opponents, and while Dr. Wolf’s initial reaction was to accuse Sen. Pat Roberts (R-KS) of engaging in a “War on Doctors,” he eventually released a statement in which he apologized. In that statement, he also attacked Roberts again, along with his second cousin Barack Obama, whose great-great-grandfather Thomas Creekmore McCurry is also Wolf’s great-grandfather:

And now, years later, because I have declared that I am willing to stand up for my country, Senator Pat Roberts wants to attack me as a doctor rather than giving Kansans a reason to vote for him. It’s sad. Pat Roberts has not been able to identify a single issue on which he thinks I am wrong and so he’s doing things the Washington way: character assassination. Kansans should know that I will not be intimidated by their bullying. I did not back down when Barack Obama’s IRS audited me and I will not back down from the desperate attacks of a 47-year Washington insider either.

Wolf is a tea party candidate who is backed by the Senate Conservatives Fund, and has been trading on his distant relationship to President Obama for years in order to amplify his opposition to the President’s health care reforms.