Oh The Irony: Only The Republicans Can Now Save The Public Option
video

Oh The Irony: Only The Republicans Can Now Save The Public Option 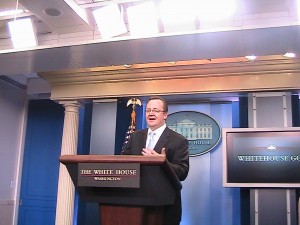 The public health insurance option has been declared dead more times than the red-shirted guy in the Enterprise landing party, yet it somehow manages to pop back up every time. Now, at the 11.99th hour, the incredibly popular provision’s best hope lies in its most vociferous opponents’ hands.

Now that the Senate is trying to pass the reconciliation fixes, the Republicans are looking to find any technicality that might send it back to the House for final passage. If they do, they also crack open the door for the public option.

The Democrats are trying to get the reconciliation bill passed exactly as is, because even a small change could send it back to the House of Representatives for one final vote. Even if the Republicans succeed at getting the bill sent back to the House, though, it’s only delaying the inevitable. Nobody realistically expects House Dems to vote it down, and give up this huge legislative victory.

As Lawrence O’Donnell pointed out last night, this means that Senate Democrats, at this point, have every incentive not to add a public option, but if the Republicans find their technicality, all bets are off.

It was with this scenario in mind that I asked Robert Gibbs about the White House’s position on the public option in reconciliation on Monday: (the 2nd question)

TC:    My second question was, there’s also been some talk on the left about how any Democratic senator could sponsor an amendment to put a public option in the reconciliation package.  If that happened, would that be something the President would push for?

MR. GIBBS:  I’m going to wait for the Senate to decide what they want to do in terms of amendments.

While not much of an answer, this wasn’t what I expected Gibbs to say. If the White House was against a public option amendment, I would have expected Gibbs to point out that any deviation from the current reconciliation bill would send it back to the House and delay or endanger the fixes. He didn’t say that.

If the Democrats are smart, they’ll at least pretend this is an option, which might scare the Republicans into dropping their opposition to the reconciliation fixes. If not, how beautiful would the irony be that the Republicans’ desperate attempt to block some minor changes could open the door to the public option?