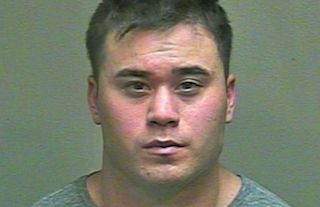 Because of the nature of the victims, the Oklahoma NAACP president told local station KOCO that he plans to ask Attorney General Eric Holder to investigate the case as possible hate crimes.

Similar to the crowdfunded defense campaign that appeared on GoFundMe.com for Officer Darren Wilson after he shot unarmed black teenager Michael Brown, supporters of Holtzclaw’s have set up a fundraising platform on that same site that aims to collect $100,000 for his legal fees (it stands at just over $7,000 as of Saturday afternoon). It is connected to a Facebook page titled “Justice for Daniel Holtzclaw” that currently has more than 400 “likes.”

“Daniel Ken Holtzclaw, a 27 year old Oklahoma City Police Officer, not only DESERVES but is required by law to be given a Presumption of Innocence,” the Facebook page reads, before directing people to donate money to his cause.

Holtzclaw is currently being held on $5 million bail and has remained in jail since his initial arrest on August 21.

Watch video below, via USA Today: