O'Reilly Vs. Olbermann | The O'Reilly Factor Vs. Countdown 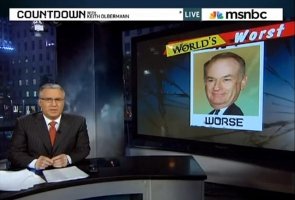 Stu Bykofsky is a braver man than most. Last week, he watched every episode of both The O’Reilly Factor and Countdown with Keith Olbermann—and managed to live to tell the tale. His mission? To determine which O-named pundit runs a more balanced show by counting the number of liberal, conservative, and politically neutral guests on each. According to Bykofsky, it was no contest: “The results prove you hear more conflicting opinions on The O’Reilly Factor than on Countdown, which seems allergic to any conservative idea.”

The math here is a tiny bit fuzzy—Bykofsky counts Charlie Crist, who appeared on Countdown, as a political neutral although Florida’s former governor, a newly-minted independent, still espouses right-of-center views. He also deems Michael Shermer, a self-proclaimed Libertarian and publisher of Skeptic magazine, left-leaning because he “attacks” Karl Rove on Olbermann’s show—even though plenty of prominent conservatives have indicated displeasure with Rove. Bykofsky also disparages Olbermann but declines to do the same for O’Reilly, as evidenced by this passage:

Only two “Countdown” guests tonight as Olbermann gloms the last 20 minutes for a “Special Comment” tirade against the tea party. It wants to create, he hisses with his veins bulging and eyes popping, a “theocracy for white males.” (Remember that.)

Generally, though, Bykofsky’s findings are pretty damning. Even if Olbermann did have fewer guests overall than O’Reilly, his pool was a lot less diverse than his rival’s. As Bykofsky writes, “If you never want to hear anyone challenge liberal views, lock in on Olbermann. While progressives disdain Fox’s claim of being “fair and balanced,” The O’Reilly Factor does present opposing views. O’Reilly will cut them off in midsentence, true, but he even does that to people who agree with him. (Shock therapy might help.) Olbermann seems unable to even listen to anything other than progressive orthodoxy.”

Read his entire rundown at Philly.com.