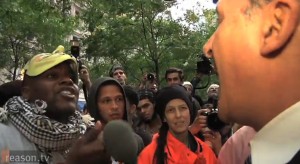 Euro Pacific Capital head Peter Schiff paid a visit to Occupy Wall Street this week. I know: Groan, right? Another pundit type with a camera shows up, finds the biggest noobs down there, makes them look foolish, edits out the answers that he doesn’t like, puts it on YouTube, and conservatives post it on their Facebook walls and send to friends, laughing at the uninformed masses. But guess what? Schiff’s video was probably the most fair and insightful “guy takes a trip to Occupy Wall Street” video we’ve seen so far. It’s also a hefty 18 minutes long.

Yes, Schiff was trying to prove his own point, but he also gave the protesters a chance to be more than just dirty hippies shouting things. And some of them came across as smart and well-informed. The piece could have been “Jaywalking.” Instead, it was the closest we’ve seen to a civil discussion in front of a camera down there. Armed with a sign that read, “I am the 1%: Let’s Talk,” Schiff invited people to argue their points against him. Instead of disagreeing and then violently shutting them down with talking points before moving on to the next person, Schiff — at least, more often than not — somewhat agreed with parts of their argument, but then steered their anger in the right direction. He didn’t want banks bailed out. He thinks college is too expensive. He warned people about the housing bubble. He told a homeless veteran that he wasn’t in favor of the wars. Part of his point, however, was that people should be upset with the government and not with Wall Street. There probably weren’t many people whose minds were changed — either by talking to Schiff or watching the video — on either side. But the video at least breaks from the annoying “gotcha” stunts that we’ve seen so far.

Some random thoughts from watching the video, from just an entertainment point of view:

-The protesters are aware of the people coming down and trying to trick them into saying something dumb. One man’s warning to Schiff: “I am not a ramp so that you can do an ollie in front of your camera”
-Schiff is then told that the 99% is just one meme out of many memes. His response: “What’s a meme?”
-If you want to argue that Schiff cleverly edited some parts, there’s an extended clip of the lady screaming at him to repeal the Bush tax cuts on MRC TV that shows it just to be, essentially, more yelling.
-At the beginning of his interview with the “Bush Tax Cuts” woman, he asks her if she’d like to get into the one percent. Her initial answer, which she tried to stop: “No.”
-Right around the 8:30 mark, one of the more animated protesters calls Schiff a fool and an idiot for wanting to disband the EPA and FDA. He was wearing a mask.
-At the end, a woman approaches Schiff and claims to be another member of the 1%. I am not saying this woman is lying, but I wonder how many people might be going down to the protests, pretending to be a member of the 1%, just to get a little more attention heaped on them. It seems like a fun thing to do, in a Princess Caraboo-type way.

Enjoy the video below, courtesy of ReasonTV: