One Week Before the Inauguration, Trump Still Attacking ‘Guilty As Hell’ Hillary Clinton 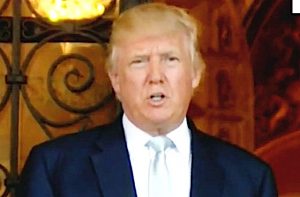 Stop me if you’ve heard this one before:

Sound familiar? President-elect Trump, who in only one week’s time will be sworn in as our nation’s next Commander in Chief, defended himself from the onslaught of Russian headlines this week via his favorite social media platform — and managed to rope in his old Democratic rival too, just for fun.

It began innocently enough Friday morning with an update about his Cabinet appointments:

All of my Cabinet nominee are looking good and doing a great job. I want them to be themselves and express their own thoughts, not mine!

Easy enough. But that wouldn’t be the end of the early AM Tweeting; not by a mile. He continued, addressing the “phony allegations” contained in the 35-page dossier leaked by Buzzfeed earlier this week. The President-elect further alleged that the information contained in the document was put together by “sleazebag political operatives.”

It now turns out that the phony allegations against me were put together by my political opponents and a failed spy afraid of being sued….

Totally made up facts by sleazebag political operatives, both Democrats and Republicans – FAKE NEWS! Russia says nothing exists. Probably…

released by “Intelligence” even knowing there is no proof, and never will be. My people will have a full report on hacking within 90 days!

You catch that delicious phrase dripping with presidential poetry? “Sleazebag political operatives”? It’s right out of a West Wing episode.

But then Trump, who — just to remind you, will become President of the United States one week from today — invoked Clinton personally for seemingly no good reason.

What are Hillary Clinton’s people complaining about with respect to the F.B.I. Based on the information they had she should never…..

have been allowed to run – guilty as hell. They were VERY nice to her. She lost because she campaigned in the wrong states – no enthusiasm!

Well, then again, his Tweets did come shortly after a Fox & Friends segment on the Clinton camp and the Department of Justice’s investigation into the FBI, so I suppose we shouldn’t be too surprised.

The Presidential Inauguration of Donald Trump will take place one week from today, January 20th.
—