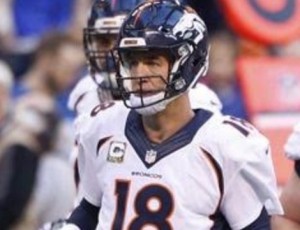 “The way to deal with superstition is not to be polite to it, but to tackle it with all arms, and so rout it, cripple it, and make it forever infamous and ridiculous. Is it, perchance, cherished by persons who should know better? Then their folly should be brought out into the light of day, and exhibited there in all its hideousness until they flee from it, hiding their heads in shame.”

Mencken was obviously ahead of his time, particularly when it comes to superstition in the NFL. Think about it: Here we have grown men, those of the fast and vast and fearless variety, actually believing that if they adhere to a certain routine, pray to a certain God or wear a certain color, the end result will be victory. Exhibit A today is the Denver Broncos — because it gets first uniform color choice (home/away) thanks to an alternating conference system in Super Bowl — have decided to wear their all-white variety over the home orange you see Peyton Manning in above.

The reason for it is dubious history: The Broncos have appeared in seven Super Bowls. On four of those occasions, the team wore orange. It’s first try in that color was actually the best one, losing by only 17 to the Cowboys in Super Bowl XII (27-10). Its next orange appearance on the big stage ten years later was downright ugly in a 42-10 loss to the Redskins in San Diego. It got even more insulting two years later, with the 49ers putting up 55 on the Orange Crush without breaking a sweat as the Bronco offense again failed to break the 10-point plateau in what is still the worst defeat in Super Bowl history.

But finally, finally, after Denver inexplicably changed its uniforms to navy and white (with only a hint of orange) was the organization able to capture its first championship by beating the heavily-favored Packers, 31-24 in 1998. The following season they would return to the Super Bowl again, this time as favorites, and routed the Falcons (34-19) wearing basically the same all-white duds you’ll see a week from Sunday. Quarterback John Elway would retire after that season and later become general manager of the team. A few years ago, I asked Elway if he actually liked the switch to navy. He admitted he didn’t at first, but smiled and said: “I gained a soft spot for them since I never lost a game wearing that color in two years.” And it’s true: Elway was 20-0 when sporting navy. An incredible, weird stat…

So after a long drought post-Elway, Denver returned to the Bowl again, this time under Peyton Manning. The current orange uniforms — a cartoonish, insulting version of the old Orange Crush classics worn in the 70s, 80s and most of the 90s — were center stage at the Meadowlands against the Seahawks two years ago. And once again, the Broncos didn’t fail to disappoint in adding to the misery with the 43-8 loss. Add it all up: In four Super Bowls Denver has worn orange, the team has been outscored 167-38.

Overall — and this is a fascinating tidbit — teams wearing white in the Super Bowl have won 30 of the 49 games played thus far. And one more thought: The Panthers switched to white during the playoffs after going 8-0 at home wearing either black or blue, so perhaps the Broncos saw a two-birds/one-stone scenario in forcing Carolina out of its playoff color in the Super Bowl. One more factoid: Peyton is 1-2 in three Super Bowls. His only victory came wearing white as a Colt against my Bears eight years ago. No matter: The Panthers are 4.5 favorites regardless of uniform color.

The way to deal with superstition is not to be polite to it, but to tackle it with all arms, and so rout it, cripple it, and make it forever infamous and ridiculous. The Broncos are tackling it all right. Most of its players weren’t even born when the Broncos suffered those horrible defeats back in the 80s wearing those orange duds. Some weren’t on the team two years ago when the Seahawks suffocated them in the swamps of Jersey.

No matter. Superstition is alive and well in the NFL… where optics apparently carry the same weight as they do in that other savage arena of the political variety.