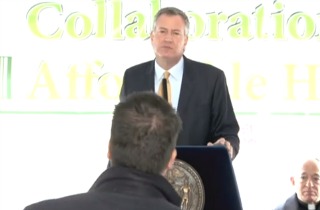 Watters started off by asking de Blasio if he was familiar with his “Watters World’ segment. When de Blasio said no, Watters gave his standard bro line he gives in every single one of those segments: “I’m Watters, and this is my world right here.”

He said that not only have de Blasio’s people not responded to interview requests, but they haven’t been respectful. De Blasio doubted that was true and tried to move on. But Watters would not let de Blasio move on to something of actual substance, repeatedly badgering him as he called on another reporter.

Total stunt. We've been kind enough to decline their intvw requests via phone AND email.

And one de Blasio spokesperson couldn’t help but take a shot at O’Reilly over the stunt:

I thot @BilldeBlasio handled that stunt pretty well. Im sure @oreillyfactor was hoping for this kinda react: https://t.co/9AntjJ8kpC