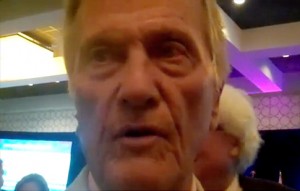 Pat Boone continues his crusade against satire that offends his sensibilities, asserting that the government should punish those who blaspheme against God.

Speaking to Alan Colmes on his radio show Friday, the 81-year-old singer/actor/Obama birther was still sore about the SNL parody of the Christian movie God’s Not Dead 2, which Boone appears in. The sketch skewers the film’s premise — that Christians in America are persecuted — by depicting an evangelical baker who is sued by a gay couple and their Jewish ACLU lawyer because she refuses to admit that “God is gay.”

Speaking to Colmes, Boone rhetorically asked SNL producer Lorne Michaels if he would be all right with a sketch that called his mother a “diseased whore.”

“I mean, that’s just his mom,” Boone said. “What about the God of all creation?”

Boone has been making the media rounds, expressing his moral outrage at the parody. He told the Hollywood Reporter that the SNL skit was “diabolical” and “outright sacrilege.”

“You can mess around with Christians and Christianity but when you start calling God names, God and the Holy Spirit are one and blasphemy is the unforgivable sin,” he said Wednesday on Fox News

On Colmes’ show, Boone went a step further and said that the sort of mockery that impugns God should be punishable by law.

COLMES: Would you like the FCC to declare a show like Saturday Night Live or any other show can’t do that kind of humor?

BOONE: You cannot do blasphemy, yes.

COLMES: You would like the FCC to make that deceleration?

COLMES: And be punished and fined in some way if they did that kind of humor?

BOONE: I sure do, I do. And I would say at least 90% of the American public would say “Yes, I agree.” And if the public doesn’t have any say about it, it’s the public airwaves.

COLMES: So what should be the punishment then if the FCC says we’re not going to allow this, what would be the proper punishment?

BOONE: Lose license, just like any other law. If you disobey the law, you’re punished for it. And you lose the ability to keep doing it.

COLMES: Well, the show doesn’t get a license, but broadcast stations do. So it’s the stations that would suffer.

BOONE: It’s the network, or whoever is responsible for the shows there should be regulations that prohibit blasphemy. It’s hard to determine exactly what obscenity is, what blasphemy is. But to call God by some profane name, I think that anybody with a rational mind would agree that’s blasphemy.

COLMES: So for calling God a “boob man,” there should be a punishment for that, or “God is gay.”

BOONE: I certainly do.

God’s Not Dead 2, released by the independent Christian studio Pure Flix, has been in theaters for three weeks. It is the eighth worst-reviewed movie of 2016 so far, according to Metacritic.

Check out the audio above, courtesy of The Alan Colmes Show.