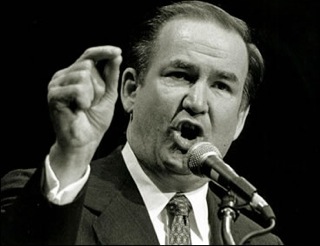 It is far too soon after the tragedy to define Norweigian psychotic mass murderer Anders Breivik as bearing any mainstream political stripe, and yet his rambling, incoherent manifesto has landed him a number of adjectives– from “Christian fundamentalist” to”xenophobic anti-Islamist.” At least this much is clear: Breivik thought immigration was a threat to national identity and he’s apparently found one ally on that front in America: Pat Buchanan.

Buchanan penned an editorial on this Breivik monster for World Net Daily today (where else?), where he in no uncertain terms labeled Breivik “a cold-blooded, calculated killer,” “evil,” “coward,” and “deluded.” What he refuses to call Breivik, however, is “insane,” because he exhibited “some intelligence” in identifying what Buchanan agrees is the main threat to civilized European culture: Islamic immigration.

Buchanan writes that, much like Thomas Jefferson wrote that the battle over slavery was to him a “fire bell in the night,” so too are Breivik’s actions, highlighting not the threat of right-wing xenophobic extremism, but that of Islamic terror. He argues that Breivik’s point is not unique to the far right, as “Angela Merkel of Germany, Nicolas Sarkozy of France and David Cameron of Britain have all declared multiculturalism a failure. From votes in Switzerland to polls across the continent, Europeans want an end to the wearing of burqas and the building of prayer towers in mosques.” Europeans, he concludes, who are both murderous and otherwise.

Buchanan goes on to hit on the usual talking points currently floating around conservative circles– that conservatives will be the victims of “guilt by association” thanks to his actions; that the backlash will be no different than when Sarah Palin found herself in liberal crosshairs after the Tuscon tragedy that seriously injured Rep. Gabrielle Giffords, herself a target of Palin’s political crosshairs– at least by way of illustration. He adds a quip about Norway participating in the Afghanistan invasion and the Libyan “kinetic operations” and then claiming to be “peaceful and progressive,” which doesn’t really go anywhere. He also makes it clear that, to him, the moral of the story is as follows: “That [macro-] threat comes from a burgeoning Muslim presence in a Europe that has never known mass immigration, its failure to assimilate, its growing alienation, and its sometime sympathy for Islamic militants and terrorists.” He then concludes with this gem:

As for a climactic conflict between a once-Christian West and an Islamic world that is growing in numbers and advancing inexorably into Europe for the third time in 14 centuries, on this one, Breivik may be right.

That Europe faces a problem with ethnic enclaves attempting to divert the power of the federal government away from them to maintain what would otherwise be illegal practices in their culture is truth, and a fair point to bring up in most other arguments– as is the point that many in the media jumped to blame Islamic terrorists before swinging that pendulum over to conservative bloggers. But that is an entirely separate discussion, and to include Breivik’s thoughts about the matter in any capacity into said discussion legitimizes his thoughts in a way no one deserves to have their thoughts addressed after opening fire on an island full of unarmed children.

Breivik could have held a number of commonly-respected opinions– say, that Hugo Chavez is a pretty terrible singer, or that the American debt crisis debate is tedious and insulting to the intelligence of the American people– but inserting him into any discussion only gives him the honor of being validated as an individual whose thoughts are worth considering. No civilized society can allow that privilege to grow out of the barrel of a gun.

Breivik proved he was willing to kill to be a respected voice in the public discourse, and suggesting that he may be right in his views– no matter what those views are, and in this case they are disgusting views– elevates him to a status that no cowardly child butcher deserves.