Pat Buchanan Is ‘Departing’ MSNBC: I Was ‘Blacklisted, But Not Beaten’ 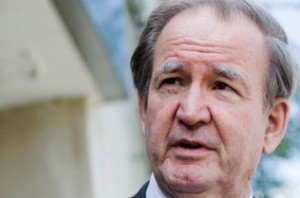 Conservative commentator Pat Buchanan is out at MSNBC, writing in The American Conservative that “My days as a political analyst at MSNBC have come to an end.” MSNBC confirmed the news. New York Times reporter Brian Stelter reports, “After ten years, we’ve parted ways with Pat Buchanan. We wish him well.”

Buchanan had previously disputed reports he was suspended from MSNBC, contending that he was instead on medical leave, however, he finally came clean that liberal activists had forced him off the air.

“After 10 enjoyable years, I am departing, after an incessant clamor from the left that to permit me continued access to the microphones of MSNBC would be an outrage against decency, and dangerous,” Buchanan said.

He went on to defend his controversial book, Suicide of a Superpower: Will America Survive to 2025?:

“If my book is racist and anti-Semitic, how did Sean Hannity, Erin Burnett, Judge Andrew Napolitano, Megyn Kelly, Lou Dobbs, and Ralph Nader miss that? How did Charles Payne, African-American host on Fox radio, who has interviewed me three times, fail to detect its racism? How did Michael Medved miss its anti-Semitism?”

MSNBC president Phil Griffin said in January that Buchanan was not allowed on the air indefinitely after the release of his latest book.

“The ideas he put forth aren’t really appropriate for national dialogue, much less the dialogue on MSNBC,” Griffin said.