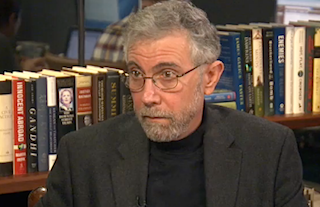 Less than two months ago, New York Times columnist Paul Krugman had this to say about Donald Trump: “He’s a belligerent, loudmouth racist with not an ounce of compassion for less fortunate people. In other words, he’s exactly the kind of person the Republican base consists of and identifies with.”

But now, in a Labor Day column with the headline, “Trump Is Right on Economics,” Krugman has actually come to the GOP frontrunner’s defense… but only when it comes to the way Jeb Bush has begun attacking his conservative credentials.

“Mr. Bush hasn’t focused on what’s truly vicious and absurd — viciously absurd? — about Mr. Trump’s platform, his implicit racism and his insistence that he would somehow round up 11 million undocumented immigrants and remove them from our soil,” Krugman writes. “Instead, Mr. Bush has chosen to attack Mr. Trump as a false conservative, a proposition that is supposedly demonstrated by his deviations from current Republican economic orthodoxy: his willingness to raise taxes on the rich, his positive words about universal health care.”

After laying out just how poorly this argument went for Mitt Romney during the 2012 election, Krugman brings things back to the choice before Republicans this time: “So am I saying that Mr. Trump is better and more serious than he’s given credit for being? Not at all — he is exactly the ignorant blowhard he seems to be. It’s when it comes to his rivals that appearances can be deceiving. Some of them may come across as reasonable and thoughtful, but in reality they are anything but.”

While Bush “may pose as a reasonable, thoughtful type,” Krugman writes, “his actual economic platform, which relies on the magic of tax cuts to deliver a doubling of America’s growth rate, is pure supply-side voodoo.”

Finally, after doing what sounds a lot like making the case for Trump, Krugman insists, “I’m not making a case for Mr. Trump.” He concludes, “There are lots of other politicians out there who also refuse to buy into right-wing economic nonsense, but who do so without proposing to scour the countryside in search of immigrants to deport, or to rip up our international economic agreements and start a trade war. The point, however, is that none of these reasonable politicians is seeking the Republican presidential nomination.”

Krugman’s name tends to be so toxic on the right, that you shouldn’t be surprised if his semi-Trump endorsement ends up in a future Jeb Bush campaign ad.