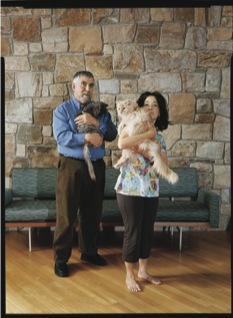 Sigh. Granted, Paul Krugman is one of the preeminent columnists and economists on the planet. Also, he’s won the Nobel Prize. Still! I suspect this lifestyle, as described in this week’s New Yorker profile of Krugman, is not one any sort of media person can probably hope to have in the future. Sigh. It certainly sounds nice. Also, nice to see credit his wife Robin Wells being recognized for her blogger-like contributions! Plus, how great is this picture.

First thing when [Paul Krugman] wakes up, he checks out a few Web sites, and if he’s not writing his column that day he and [Robin] Wells will go for a walk on the beach, or they will stroll into Frederiksted and have breakfast at Polly’s, a little coffee shop that serves iced lattes and pretty good egg burritos. If he is writing his column, he will start it on the morning of the day it’s due, and, if the spirit is with him, he will be done soon after lunch. When he has a draft, he gives it to Wells to edit. Early on, she edited a lot—she had, they felt, a better sense than he did of how to communicate economics to the layperson. (She is also an economist—they met when she was a postdoc at M.I.T. and he was teaching there.) But he’s much better at that now, and these days she focuses on making him less dry, less abstract, angrier. Recently, he gave her a draft of an article he’d done for Rolling Stone. He had written, “As Obama tries to deal with the crisis, he will get no help from Republican leaders,” and after this she inserted the sentence “Worse yet, he’ll get obstruction and lies.” Where he had written that the stimulus bill would at best “mitigate the slump, not cure it,” she crossed out that phrase and substituted “somewhat soften the economic hardship that we face for the next few years.” Here and there, she suggested things for him to add. “This would be a good place to flesh out the vehement objections from the G.O.P. and bankers to nationalization,” she wrote on page 9. “Show us all their huffing and puffing before you dismiss it as nonsense in the following graf.”

On the rare occasion when they disagree about something, she will be the one urging him to be more outraged or recalcitrant. She pushed him to denounce the filibuster. She wanted him to be more stubborn in holding out for the public option in the health-care bill. He spent a few sleepless nights wrestling with his conscience about that but ultimately decided that a flawed bill was so much better than no bill at all that he had to support it. “You can get beaten down,” he says. “When Robin and I started writing about health care, single payer was clearly the way to go. And then bit by bit you start saying, ‘O.K., you take what you can get.’ There’s a trap I’ve seen some people fall into—you let your vision of what should be get completely taken over by what appears possible right now—and that’s something I’m trying to avoid.”

In the late afternoon, they lie on beach loungers underneath a clump of sea-grape trees, facing the ocean. Krugman sips a piña colada through a straw and reads the galleys of a book about the financial crisis. They were thinking of having dinner at a place in town, but then they discovered that there was to be an Elvis impersonator singing there, so they decided to go to the Sunset Grill, where the stereo is playing Wings. It’s getting buggy on the beach, and Wells hands Krugman a can of Off. The tide is coming in. Krugman puts his book down, eases himself out of his lounger, and, still wearing his hat and sunglasses, wades cautiously into the sea.