People Want to Know: Why Did CBS Sit on Clip of Trump Telling Supporters to ‘Stop’ Harassing Minorities?

People Want to Know: Why Did CBS Sit on Clip of Trump Telling Supporters to ‘Stop’ Harassing Minorities? 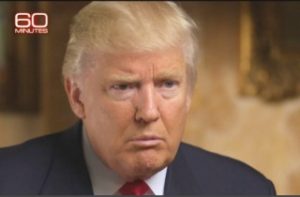 A lot of people found it curious last night that CBS decided to hold onto a clip of President-Elect Donald Trump telling his supporters to “stop it” with their hostilities towards minority groups.

Lesley Stahl interviewed Trump on Friday for 60 Minutes, and the conversation aired on Sunday night. During the talk, Stahl asked Trump about an increase in racially-charged incidents in the past few days that appear to have a connection to his controversial campaign rhetoric.

CBS previewed several clips and quotes ahead of their extensive profile, but Trump’s reaction to his supporters’ alleged hate speech was one of the biggest attention-grabbers of the entire discussion.

The segment caused a great deal of online conversation, and a lot of Twitter users are debating whether CBS should’ve had that clip out faster:

#60Mins great @realDonaldTrump intv. Made news-But him telling militant supporters to cool it should've been a bulletin released immediately

Sooooo CBS news and 60 minutes held this for two days. Think about that. https://t.co/IQqPnmLbNA

CBS could have released this earlier. https://t.co/xJLuFDXA3C

Trump tells supporters responsible for violence to 'stop it' and CBS releases various other bits of footage but holds that for two days.

The idea CBS was wrong not to release the Trump 'Stop It' quote earlier is absurd. Trump was free to speak any time! Wasn't incumbent on CBS

Good to hear this. CBS should have released sooner.:Amid reports of some supporters' violence, Trump says: "Stop it" https://t.co/r5ouBb7InC

Trump's "stop it" was definitely not a strong enough statement, not even a condemnation really,but CBS still exercised poor judgment at best https://t.co/yHQYpTRdby

CNN’s Brian Stelter also apparently found the situation odd, so he reached out for comment and got this response:

CBS's underwhelming answer: "We chose to release a quote on the issue that affects the most Americans & that was his statement on Obamacare"

Protests against Trump’s election victory continue to take place across the country.