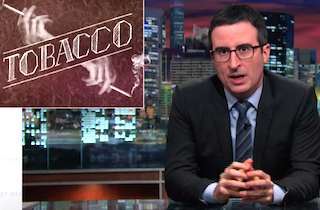 John Oliver‘s latest in-depth segment examined Big Tobacco and how the industry is trying to broaden its influence all over the world. One company he really focused on was Philip Morris (owner of brands like Marlboro and Virginia Slims), which has threatened legal actions against nations over certain laws on cigarette packing.

Well, Philip Morris ended up responding yesterday in a statement to The L.A. Times. And right off the bat they get to dismissing Oliver by saying, “Last Week Tonight with John Oliver is a parody show, known for getting a laugh through exaggeration and presenting partial views in the name of humor.”

They claim the segment featured “many mischaracterizations” of the company (though they don’t directly respond to any of the specific examples Oliver cited) and insist, “While we recognize the tobacco industry is an easy target for comedians, we take seriously the responsibility that comes with selling a product that is an adult choice and is harmful to health.”

We support and comply with thousands of regulations worldwide — including advertising restrictions, penalties for selling tobacco products to minors, and substantial health warnings on packaging. We’re investing billions into developing and scientifically assessing a portfolio of products that have the potential to be less harmful and that are satisfying so smokers will switch to them. And, like any other company with a responsibility to its business partners, shareholders and employees, we ask only that laws protecting investments, including trademarks, be equally applied to us.

You can watch Oliver’s segment in question here, via HBO: