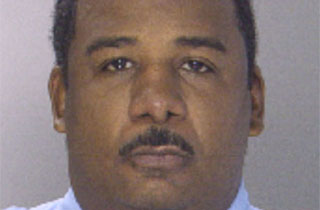 Jeffrey Walker, a Philadelphia cop arrested and charged with corruption, today testified against fellow officers who allegedly took part in years of embezzlement, illegal arrests, and false drug accusations for their own benefit.

Walker, who was arrested last year as part of an FBI sting, is cooperating with investigators in order to avoid a life sentence, and alleges that he and the fellow members of the city’s drug squad would often plant evidence and steal cash from illegal raids against drug dealers, stealing upwards of $110,000.

According to the AP, Walker, often the go-to intimidator due to his large size, and his team would target “college-boy … khaki-pants types” who were “easy to intimidate,” and would divide the money among the teams who did the arrests.

In one of their more memorable assignments, Norman leaned drug suspect Michael Cascioli over a high-rise balcony to elicit the passcode for his Palm Pilot, according to Walker, who helped scare the suspect.

City police officials later held a news conference to announce that the 2007 search had yielded more than $1.5 million in marijuana and psychedelic mushrooms, and $440,000 in cash. Federal prosecutors now say the squad raided the apartment before they got a warrant.

In another episode, Walker admitted carrying a heavy safe full of drug money down 17 flights of stairs to avoid being seen on the elevator security camera. And he described another heist when he stuffed so much bundled cash into his police vest that he had to wear Liciardello’s vest over his to cover the bulge when he left the house.

Walker agreed to cooperate last year after being caught in an FBI sting stealing $15,000 from a suspect and planting drugs in his car. He has been in custody for nearly a year and hopes to avoid a life sentence through his testimony.

Apparently Walker fell out with the group after a series of personal problems, leading to his cooperation with authorities.