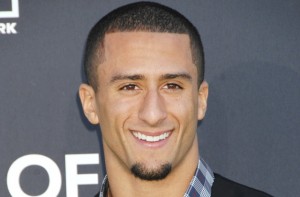 The Santa Clara Police Officer’s Association sent a letter to the San Francisco 49ers threatening a boycott of their games over Colin Kaepernick‘s police protest.

Remember, Kaepernick’s refusal to stand for the national anthem at games was spurred in part by recent police shootings. He said that black people are being targeted by cops and that police forces aren’t doing enough to crack down.

They bring up what he has said about police officers recently and express their outrage:

Blanket statements that police officers in general murder minorities is completely false and insulting to the dedicated men and women in law enforcement agencies across America.

They’re concerned about “harassing behavior” and highlight how many SCPOA members have provided security to many 49ers games.

“Our officers voluntarily agree to work these assignments,” they write. “If the 49ers organization fails to take action to stop this type of inappropriate workplace behavior, it could result in police officers choosing not to work at your facilities.”