Politi-f**ked: Why Politifact’s ‘Lie Of The Year’ Is Not Just Wrong, It’s Irresponsible

Politi-f**ked: Why Politifact’s ‘Lie Of The Year’ Is Not Just Wrong, It’s Irresponsible 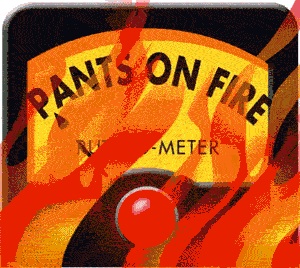 Since announcing “Republicans voted to end Medicare” as its “Lie Of The Year” yesterday, Pulitzer Prize-winning fact-check outfit Politifact.com has faced more blowback than a chronic spitter on a Ducati. While they apparently think this is just griping by the left, even the conservative National Review says they got it wrong. What Politifact doesn’t seem to realize is that this wasn’t just a wrong decision, it was an irresponsible one that undercuts their own, and journalism’s, duty to serve the public.

After their announcement, Politifact editor Bill Adair went on CBS’ The Early Show to propagandize, and even lie, about the Paul Ryan budget plan, while the site’s Twitter feed blithely retweeted cherry-picked criticism of their decision (notably not that National Review post, nor Mediaite’s calling out of their editor), and retweeting people who cast the blowback as a left/right issue. They also made sure to buttress their decision with support from WaPo fact-checker Glenn Kessler (himself prone to bad judgment), and by pointing out that FactCheck.org made a similarly bad ruling.

They were also careful to clarify that their decision was not based on their reader’s poll (some had alleged that the award was the result of Paul Ryan campaigning for votes), which itself contained some interesting information:(emphasis mine)

For the first time since PolitiFact started naming a Lie of the Year, readers and editors have made different choices for the top falsehood.

PolitiFact editors chose the Democratic line that Republicans voted “to end Medicare” as the 2011 Lie of the Year, while the winner in our reader poll was the Republican claim that “zero jobs” were created by the economic stimulus. (The Medicare claim was No. 3 in the readers’ poll.)

The fact that everyone in the world, including Politifact’s own readers, thinks they blew it does not, in and of itself, mean Politifact is wrong. Indeed, the very premise of a fact-check is that facts aren’t subject to a popular vote. What it should do, though, is make them pause to consider that maybe, just maybe, they got this one wrong. Alas, they have demonstrated little aptitude for this.

If this were simply a question of harm to Politifact’s credibility among journalists, this wouldn’t be such a big deal, but this decision could have a much more devastating effect. Even if you grant that their evaluation of that one Democratic ad is somehow technically true (which it isn’t), Politifact acknowledges that there are serious problems with Ryan’s plan, and that many Democrats (I would argue most Democrats), including President Obama, accurately described the plan as “essentially ending Medicare,” or “ending Medicare as we know it.”

So even though most Democrats accurately described the harm Ryan’s plan would do to Medicare, Politifact’s ruling makes the story about scaremongering…the thing they admit there’s reason to be scared of! As their ruling is uncritically reported by hundreds of TV anchors on year-end wrap-ups, the impression that this much wider audience will get is that the Ryan plan is nothing to worry about. The effect is to obscure the truth, rather than to distill it. The result could be worse than that.

Politifact’s ruling will almost certainly be used to convince people that the new Ryan/Wyden plan is anything less than a full assault on Medicare as we know it. Why don’t you put that in your pipe and fact-check it, Politifact?