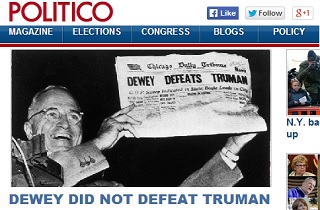 Cable news and other media outlets spent a decent chunk of time on Monday to reporting, from a new book by The Hill’s Amie Parnes and Politico’s Jonathan Allen, on a so-called “Hillary Clinton Hit List,” and while the book excerpt does contain some brand-new details and juicy blind quotes, it might all sound a bit familiar. That’s because the Clinton’s so-called “Enemies List” was extensively reported on… five and a half years ago. Conveniently, it also has the superficial ring of political retribution.

The list in question is a “so-called Hillary Clinton Hit List” because none of the reporting, then or now, establishes that Hillary Clinton had anything to do with the list, or that anyone on it was in any way “hit,” unless gangland assassination metaphors are applicable to the denial of voluntary assistance to political campaigns. The timing of the “revelation,” along with its overselling as a tool of, I don’t know, political retribution might seem suspicious to some, but HRC: State Secrets and the Rebirth of Hillary Clinton is slated for release on February 11, so it’s probably just a coincidence that they chose this excerpt, and not an attempt to even the score with Hillary’s potential 2016 rival.

What the excerpt doesn’t mention, along with many media reports on it, is that this list was reported on extensively in June of 2008. To show you how much times have changed since then (aside from the fact that when this was first reported, an iPad was something you used to sop up excess Visine), the liberal watchdog site Media Matters complained loudly at the time… about MSNBC’s extensive coverage of the story. They even did up a chart detailing, down to the second, the amount of time MSNBC devoted to the story.

The Politico Magazine excerpt does advance the story with a few on-the-record quotes, and lots of juicy anonymous ones, but fails to note the revelation of the list in 2008, and the ensuing firestorm. Maybe you have to buy the whole book for that.