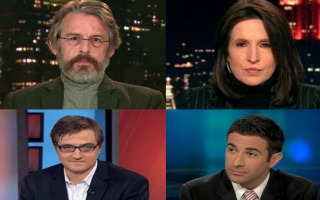 An investigative piece in POLITICO on Monday features a number of prominent left-leaning political commentators breaking their self-imposed moratorium on criticism of President Obama following his reelection. The political columnists that POLITICO quotes note that, with the election over and Obama safely guaranteed his place in history as a two-term president, it is time for journalists to press the president to explain why he failed to deliver on the promises he made to progressive in his first term.

On issues close to the hearts of progressives since George W. Bush’s presidency, including the closure of the prison at Guantanamo Bay and addressing anti-terror programs many on the left view as infringements on American civil liberties, progressives have been unimpressed with President Obama’s leadership. However, as some now admit, Obama’s reelection was a clearer imperative than holding him accountable for his broken promises. With that project completed and successful, some left-leaning columnists are making it clear that it is time for the media to press Obama to be more progressive.

“Liberals in the media are going to be tougher on Obama and more respectful at the same time,” Hendrik Hertzberg, The New Yorker’s chief political commentator and a former speechwriter for Jimmy Carter, told POLITICO. “He was the champion of our side, he vanquished the foe….. [but] now liberals don’t have to worry about hurting his chances for re-election, so they can be tougher in urging him to do what he should be doing.”

Of course, not all of the media’s silence regarding their disappointment in Obama is related to their political support for the president. For some, being critical of Republicans is simply better on the bottom line:

“There is a level at which coverage of Republican intransigence produces a visceral effect in the audience that is in some ways less conflicted and more pleasurable than critical coverage of President Obama,” MSNBC host Chris Hayes told POLITICO. This admission, that the ratings-related demands of political entertainment trump those of critical, truth-to-power journalism, should be tucked away in the wallets of Hayes’ critics.

Not all progressives find Hayes’ explanation behind left-leaning news outlets’ conspicuous lack of criticism of the president exculpatory. The Nation editor Katrina vanden Heuvel was eager to criticize MSNBC’s failure to be critical Obama for being insufficiently progressive.

“MSNBC, with all due respect, has not been that strong in terms of talking about closing Guantanamo, about militarization, about this administration’s civil liberties record,” Katrina vanden Heuvel, the editor and publisher of The Nation, told POLITICO. “We may address alternative approaches to those issues, but they won’t be the talking points on MSNBC that night.”

To his credit, The Nation columnist Ari Melber told POLITICO that “there is no reasonable argument that criticism will result in the defeat of Barack Obama.” Based on POLITICO‘s exposé, that view appears to be a minority position.

As Reason Magazine’s Matt Welch writes in his exasperated review of this POLITICO piece, the act of journalism and the protection of a vulnerable incumbent president should be mutually exclusive. Those left-leaning journalists who have admitted their complicity in an effort to protect Obama have abdicated their responsibility to their profession.