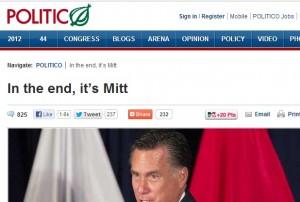 The folks over at Politico have really found their niche. If you liked Roger Simon‘s previous effort at “satire,” you’ll love the paper’s latest, which makes Jonathan Swift look like Gallagher. Like an onion, it has many layers, simultaneously satirizing the Romney campaign’s willingness to say anything to gain a short-term advantage, the candidate’s own witlessness, plus Politico’s own blind quote heroin habit, and their willingness to spin a campaign’s narrative in exchange for juicy blind quotes like Romney being a “lousy candidate” and “not quick-witted.”

Really good satire, of course, draws you in with a veneer of believability, so if Politico’s piece has a weakness, it’s that it lacks subtlety, quoting a variety of supposed campaign sources calling Romney a “lousy candidate,” or “not quick-witted,” and hilarious details like this: the badly-losing candidate already has his team writing up executive orders, never mind measuring the drapes.

They also overdid the self-satire by using way too many blind quotes, wrapped around just one real one, even for a Politico piece:

“Lousy candidate; highly qualified to be president,” said a top Romney official. “The candidate suit fits him unnaturally. He is naturally an executive.”

“He’s a great leader, but he’s not a great politician,” said a top member of Romney’s organization. “As much as we complain about politicians, we like a good politician. He doesn’t have the hand-on-the-shoulder thing. He’s not quick-witted. He’s an analytical, data-driven businessperson.”

The weapons would include tax and regulatory policy and what one aide called a “very aggressive” series of executive orders, many already on the drawing board.

Two of Romney’s friends told POLITICO he would be eager to sign a bipartisan grand bargain in the first four months in office to calm markets and ease partisan tensions.

“These states seem to all be moving in the same direction, and they’re all states we need to win,” said one of Washington’s best-connected Republicans. “This could get away from us in a hurry.”

“You have to know the room, and he doesn’t know the room,” said a top Republican in D.C. who has donated to Romney and wants him to win. “He’s missing the normal-guy gene.”

A Republican backer and donor said: “The governor’s thinking, ‘I was just making an observation based on the facts.’ But that’s what a CEO would say. A politician has to make everybody happy.”

But the dead giveaway was an anecdote in which a guy whose actual name is Marriott (they couldn’t have been more obvious if they had named the character “LeFore Seezons” or “Haywood Iago GetthaKar”) tries to paint Ronmey as a man of action who rescued “Mr. Marriott” by helping him tie up his yacht!

However, they gain back a few plausibility points by deploying a clever, overarching satirical construct that explains, not only why so many of Romney’s pals would say such horrible things about him, but also why Politico would willingly crap out all the blind quotes they were fed: Politico gets a clickable piece of content, and the Romney campaign gets out there new, new, new message: Romney sucks!

Or rather, Romney actually doesn’t suck, but he’s going to look like he sucks at the debate, and every other time he opens his mouth, but once elected, look out! Yes, that’s an absurd way to play the expectations game, but that’s why they call it “satire.”