Poll: 69% of Trump Supporters Think That When Clinton Wins, ‘It Will Be Because It Was Rigged’ 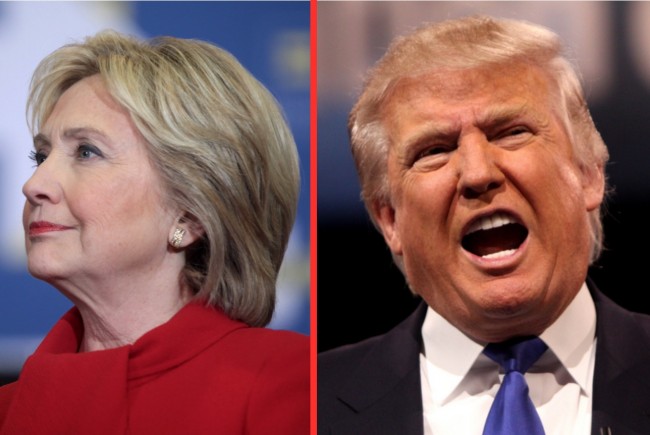 Take a careful note of my headline.

I balanced out a few options, namely, using the word “If” in place of “When” so as to read:

Poll: 69% of Trump Supporters Think That If Clinton Wins, ‘It Will Be Because It Was Rigged’

However, it is essentially — in the opinion of this writer — a foregone conclusion that former Secretary of State Hillary Clinton will win the November general election. Before we continue with the absurd findings of the Public Policy Polling data out today that suggests a staggering 69% of Trump faithful think the election will be “rigged,” let’s quickly establish why I’m so confident Trumpty Dumpty will lose yuge:

You don’t vote for the President, Trump fans. Remember your social studies classes? Well, at some point you learned that it is the electoral college that decides who wins the White House, not you and your precious vote (Aww, you thought we were a real democracy? Cute). To be specific, a candidate needs 270 electoral votes; Trump won’t even come close. By many estimates, Clinton already has 217 safely locked up. Even Megyn Kelly last week welcomed Larry Sabato onto her show with his newest prediction for the electoral college map: a 347-to-191 victory for the Democrat — “not a landslide, but a very healthy win.”

The Big Eleven. There are eleven key states in play for November: CO, FL, IA, MI, NV, NH, NC, OH, PA, VA, and WI. Many people are saying if you’re voting in any of the other 39, it’s a practice in democratic futility. Sure, every vote counts, but like Animal Farm, some votes count more than others. Clinton dominates a ground game and ad spending in those states, plus is making a play at notoriously red Georgia and Arizona. If Clinton wins Florida and Virginia alone, we’re in for one helluva concession speech from Trump Tower the night of November 8th. Oh, and by the way, Barack Obama went 21-for-22 in these eleven states over the past two elections.

Math, Math, Math. I defer to my conservative colleague John Ziegler here to lay out all of the reasons Trump is in for a shellacking by the numbers, an inconvenient truth that Trump can’t make reference to on the campaign trail (“Math is hard. For some people, math is really hard,” Ziegler writes). Among his points: the difference between primary turnout versus the general election beast, perceptions of the man’s qualifications, and the popular vote (in numbers) equated when you see a statistic like “Trump is down 6% nationally” (about 8 million people).

Hence, my confidence to use “When.”

Now, onto the PPP poll out Tuesday:

-69% of Trump voters think that if Hillary Clinton wins the election it will be because it was rigged, to only 16% who think it would be because she got more vote than Trump. More specifically 40% of Trump voters think that ACORN (which hasn’t existed in years) will steal the election for Clinton. That shows the long staying power of GOP conspiracy theories.

This is simply astounding. Trump was apparently right when he said, “I love the poorly educated!” because all it took was for the GOP candidate to strategically float the word “rigged” around in a few interviews — and go utterly and irresponsibly unchallenged — to apparently convince people that yes, the entire American democratic process at the federal, local, and state levels are being manipulated by the all-seeing eye. “I’m telling you, November 8th, we’d better be careful, because that election is going to be rigged. And I hope the Republicans are watching closely, or it’s going to be taken away from us,” he told Sean Hannity last week.

During the primaries when Trump was beating up on his Republican… let’s call them “rivals,” polls were his best friend. Now that poll after poll after poll show him getting trounced, they are inconclusive falsehood narratives perpetuated by the lamestream media like dopey columnists at Mediaite. Even the damn President himself had to field a question last week from a reporter who asked the leader of the free world to confirm that the election would not be rigged (“I don’t even really know where to start on answering this question,” he dryly replied).

Factcheck.org and Politifact have verified that the accusations of election rigging are false, but of course, as the legions of Mediaite readers who double up as Trump supporters will say in the comments section below (as well as my Twitter mentions — can’t wait): “those are liberal sites! The fix is in! Clinton’s going to steal the election!” Stop it, you’re acting silly, being fooled into a goofy and outlandish way of thinking because you’re allowing yourself to be brainwashed by a man with the emotional IQ of a child who thinks nobody likes him so he’s gonna eat some worms.

Can’t wait to hear how Trump and his supporters argue their way out of the November results, when Clinton trounces Trump in both the electoral college and the popular vote by vast margins. Even when Clinton safely takes home 300+ electoral votes and over 70 million in the raw vote… the election will be “rigged,” right?