Poll: Four Times As Many Republican Woman Would Prefer A Male President

Poll: Four Times As Many Republican Woman Would Prefer A Male President 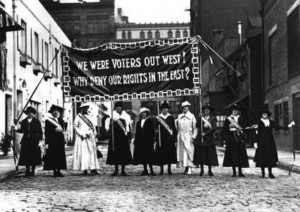 Herman Cain won an interesting straw poll this weekend: that of The National Federation for Republican Women, the self-touted “most extensive poll in the history of Conservative woman.” Cain earned an astonishing 48.9 percent of the votes, trouncing nearest followers Rick Perry (14.1 percent), Mitt Romney (13.3 percent), and Newt Gingrich (12.5 percent). More notedly, however, might be the fact that more women polled (1.8 percent) filed as undecided than ready to vote for Michele Bacchman. You would think that, voting in an all female-poll like this, gender might weigh more heavily in their considerations. But apparently that is not the case.

Gender issues, if this poll is to be believed, are of little concern for female Republican voters. The majority of women polled (80.8 percent) were satisfied with the current crop of mostly male Republican contenders, and very few indicated that they would change their vote if Sarah Palin were to enter the race (22.7 percent, whereas 34 percent would for Chris Christie). Moreover, “Social Values” and “Health Care,” two areas often of particular interest to female voters, ranked lowly as concerns to be considered in choosing the Republican nominee. Lower, even, than “Character.”

A later question in the poll addresses the issue directly, asking: “As a general statement, would you rather see a man or a woman serve as president of the United States?” While the majority responded “Doesn’t Matter,” nearly four times as many of those who do think it matters said they would prefer a male president (19.6 percent) as opposed to those who would rather a female president (4.8 percent). In other words, of those who care, four times as many Republican women would prefer to see a man in the White House, as would a woman.

Interestingly, the poll was taken at the NFRW’s 36th Biennial Convention, a meeting of “Republican women from across the nation who are extremely active and influential in their states and communities,” according to NFRW President Sue Lynch. While women surely are not responsible for voting into office other women just because of their gender, it strikes me as unusual that in 2011 a group of particularly powerful, active and engaged Republican women would not eagerly be seeking a strong female voice in the political body. And moreover, that they might even actively prefer, in such numbers, a male president to a female president.