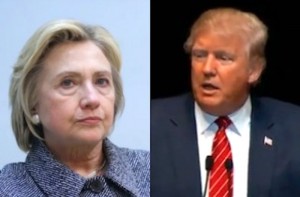 After that came NBC News…

Do four major polls officially make a trend? It’s safe to say yes. And if that’s the case, Donald Trump is now either in a dead heat nationally or even beating Hillary Clinton, with momentum decidedly going his way (up 45-to-42 percent in the last poll listed above released Wednesday). The same goes in battleground states like Florida, Pennsylvania and Ohio if that recent Q-poll is any indicator. Yes, it’s still early, yes… but given how far back Trump is supposed to be here (trailing in most polls by double digits in head-to-head matchups with Clinton for months), the results now consistently coming in are either shocking, downright disturbing or positively uplifting. That perspective all depends on how one votes, of course.

So let’s continue this exercise by juxtaposing these polls against the media scrutiny Trump has received since essentially securing the nomination after winning Indiana and putting the last of 17 rivals in Ted Cruz and John Kasich away:

May 13: Recordings of him posing as his own publicist back before Bill Clinton was president are unearthed. The story dominates cable, print, online and social media for days…

May 15: A breathless front page New York Times piece alleging the then-entertainer/real estate mogul’s lewd behavior toward women at his beauty pageants goes viral last weekend. Same deal: Wall-to-wall coverage and analysis on cable news and the Sunday talk shows… all compounded by countless editorials piggybacking on the story to give it legs into the beginning of this week. Said piece is co-written by the ambiguous Michael Barbaro, who owns the mentality of a snarky 23-year-old blogger on Twitter but really, really wants you take him seriously when it comes to his official (and completely misleading) job of political reporter objectively covering the Trump campaign for the New York Times… a leading newspaper that hasn’t endorsed a GOP presidential candidate since 1956.

The story appears to be damaging at first. Trump already has enough problems with female voters, right? But then the piece is exposed for what it is (as a partisan hit piece) after Trump’s ex-girlfriend featured in the story condemns the report.

And guess what happens?

There have been other examples of Trump receiving the kind of coverage that would otherwise destroy other candidates swiftly, but those are the big two that come to mind. Each have the same thing in common: They both focus on actions that occurred last century… years and years before Trump became a politician in 2016. And the takeaway is this:

1) American voters don’t care what someone in the private sector did in their personal lives decades ago.

2) The American media is so loathed right now, so mistrusted, so discredited, that when most of said media decides to go all-in on stories like the “John Miller” recordings or Trump’s actions at beauty pageants, they react one of two ways:

– Or see right through what the media they hold in contempt is attempting to not-so-subtly accomplish: Destroy a candidate by digging up old stuff that either doesn’t hold up like the pageant story or is brushed off/chuckled at as Donald Trump simply being Donald Trump (Google: “That’s just Brett Favre being Brett Favre, John Madden, and excuses for bad interceptions” for an idea of what the Trump-being-Trump part means).

To the billionaire’s credit, he has mastered what is arguably Hillary Clinton’s most notable strengths: Playing the victim and calling out conspiracies designed to destroy him. Hillary points the finger at Republicans for dirty tricks; Trump points the finger at the media…which to many Republicans are seen as extensions of the Democratic Party anyway. And for the latter, time after time, it works.

The latest Fox News poll — released Wednesday — has Trump up on Clinton. His favorability rating among Republican women is now up to 65 percent… a 10-point jump since March. But here’s the worst news if you’re in the Clinton camp… where she’s lost 20 of the past 27 contests to Bernie Sanders: Clinton’s unfavorables are now at 61 percent. Or to put it another way, five points higher than Trump (56 percent).

Let that breathe for a moment and then ask yourself this: If this truly is a race to the bottom with two deeply-flawed candidates, who do you think has a better chance of winning if it’s all fought in the mud?

Everything. Everything has been turned upside down. Trump keeps taking kidney punch after kidney punch in the media and just keeps on blowing through stop signs with no sign of slowing down. Meanwhile, Hillary will still get the nomination thanks to winning larger states and the delegates that go with them, but even her most strident supporters will admit there’s absolutely no wind at her back going into the general, particularly with the threat of an ugly revolt at the Democratic convention looming in Philadelphia this summer.

But Trump continues to climb. And it’s not because of a bold economic strategy or grand plan to defeat ISIS. He’s simply playing the media like a grand piano on the kind of sensational stuff they love to eat and breathe (largely for ratings, but also to avoid the tedious work of policy deep-dives)… all while taking what should be devastating stories and somehow turning them into positives.

The old complaint from Republicans used to be that the media is out to get them. “How can we win when they’re so mean to us?” they whined. But here’s the dirty little secret:

A press obviously hostile towards its nominee is now an advantage. The messenger is as flawed as the candidate they target.

Know this: All of those massive egos in the industry are having a very hard time accepting they’re not remotely as influential as they thought they were. And Donald Trump — who has witnessed and learned from the toughest press of all in the form of the New York tabloids — is not only punching back… but landing more than just kidney punches.

The polls are moving is his direction. The drift defies conventional logic.

That’s what happens when an unafraid, unconventional candidate is running the show.