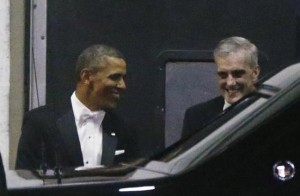 On Saturday evening, President Obama attended his second Gridiron Club Dinner since taking office, and while he joked that the sequester had forced him to furlough his joke writers, the set he delivered was below his usual standards. Maybe he’s saving his “A” material for the White House Correspondents Association Dinner. The 128th annual dinner took place at the Washington Renaissance Hotel, and is one of several such dinners the President attends in a given year. According to the pool reporter, the menu for the dinner was as follows:

The President took several shots at The Washington Post‘s Bob Woodward, among others, but Woodward earned three jokes in the set. “We noticed that some folks couldn’t make it this evening,” Obama said. “It’s been noted that Bob Woodward sends his regrets, which Gene Sperling predicted.”

After pausing for laughter, President Obama continued, “I have to admit this whole brouhaha had me a little surprised. Who knew Gene could be so intimidating? Or let me phrase it differently — who knew anybody named Gene could be this intimidating?”

“Now I know that some folks think we responded to Woodward too aggressively,” he concluded, “But hey, when has — can anybody tell me when an administration has ever regretted picking a fight with Bob Woodward? What’s the worst that could happen?”

On that subject, the White House, for the first time, released a full transcript of President Obama’s Gridiron Dinner remarks, which are usually off-the-record, as well as allowing the press pool to cover the event. The press pool was not allowed in to the President’s last Gridiron Dinner, in 2011.

Here’s the full transcript of the President’s remarks, via email from The White House:

AT THE GRIDIRON DINNER

THE PRESIDENT: Before I begin, I know some of you have noticed that I’m dressed a little differently from the other gentlemen. Because of sequester, they cut my tails. (Laughter.) My joke writers have been placed on furlough. (Laughter.) I know a lot of you reported that no one will feel any immediate impact because of the sequester. Well, you’re about to find out how wrong you are. (Laughter.)

Of course, there’s one thing in Washington that didn’t get cut — the length of this dinner. (Laughter.) Yet more proof that the sequester makes no sense. (Laughter.)

As you know, I last attended the Gridiron dinner two years ago. Back then, I addressed a number of topics — a dysfunctional Congress, a looming budget crisis, complaints that I don’t spend enough time with the press. It’s funny, it seems like it was just yesterday. (Laughter.)

Now I know that some folks think we responded to Woodward too aggressively. But hey, when has — can anybody tell me when an administration has ever regretted picking a fight with Bob Woodward? (Laughter.) What’s the worst that could happen? (Laughter and applause.)

But don’t worry. We’re all friends again in the spirit of that wonderful song. As you may have heard, Bob invited Gene over to his place. And Bob says he actually thinks that I should make it too. And I might take him up on the offer. I mean, nothing says “not a threat” like showing up at somebody’s house with guys with machine guns. (Laughter.)

Now, since I don’t often speak to a room full of journalists — (laughter) — I thought I should address a few concerns tonight. Some of you have said that I’m ignoring the Washington press corps — that we’re too controlling. You know what, you were right. I was wrong and I want to apologize in a video you can watch exclusively at whitehouse.gov. (Laughter.)

While we’re on this subject, I want to acknowledge Ed Henry, who is here — who is the fearless leader of the Washington press corps now. (Applause.) And at Ed’s request, tonight I will take one question from the press. Jay, do we have a question? (Laughter.) Surprisingly, it’s a question from Ed Henry. (Laughter.) “Mr. President, will you be taking any questions tonight?” (Laughter.) I’m happy to answer that. No, Ed, I will not. (Laughter.)

I also want to recognize David Corn. He’s here from Mother Jones magazine. He brought his iPhone. So Bobby Jindal, if you thought your remarks were off the record, ask Mitt Romney about that. (Applause.)

I have to say, I thought Bobby was incredibly funny this evening. (Applause.) I thought he was terrific. Amy Klobuchar was sparkling and fantastic and fabulous. (Applause.) I am worried about Al Franken though. (Laughter.) How do you start off being one of the original writers for Saturday Night Live and end up being the second-funniest Senator in Minnesota? (Laughter and applause.) How the mighty have fallen. (Laughter.)

Now I’m sure that you’ve noticed that there’s somebody very special in my life who is missing tonight, somebody who has always got my back, stands with me no matter what and gives me hope no matter how dark things seem. So tonight, I want to publicly thank my rock, my foundation — thank you, Nate Silver. (Laughter.)

Of course as I begin my second term, our country is still facing enormous challenges. We have a lot of work to do — that, Marco Rubio, is how you take a sip of water. (Laughter and applause.)

As I was saying, we face major challenges. March in particular is going to be full of tough decisions. But I want to assure you, I have my top advisors working around the clock. After all, my March Madness bracket isn’t going to fill itself out. (Laughter.) And don’t worry — there is an entire team in the situation room as we speak, planning my next golf outing, right now at this moment. (Laughter.)

But those aren’t the only issues on my mind. As you are aware — as has been noted this evening — we’ve had to make some very tough, huge budget cuts apparently with no regard to long-term consequences, which means I know how you feel in journalism. (Laughter.) I’ve been trying to explain this situation to the American people, but clearly I am not perfect. After a very public mix-up last week, my communications team has provided me with an easy way to distinguish between Star Trek and Star Wars. (Laughter.) Spock is what Maureen Dowd calls me. Darth Vader is what John Boehner calls me. (Laughter.)

Of course, maintaining credibility in this cynical atmosphere is harder than ever — incredibly challenging. My administration recently put out a photo of me skeet shooting and even that wasn’t enough for some people. Next week, we’re releasing a photo of me clinging to religion. (Laughter and applause.)

I’m also doing what I can to smooth things over with Republicans in Congress. In fact, these days John McCain and I are spending so much time together that he told me we were becoming friends. I said, “John, stop. Chuck Hagel warned me how this ends up.” (Laughter.)

It took a while, but I’m glad that the Senate finally confirmed my Secretary of Defense. And I have to say, I don’t know what happened to Chuck in those hearings. I know he worked hard, he studied his brief. And I even lent him my presidential debate team to work with him. (Laughter.) It’s confusing what happened. (Laughter.)

But all these changes to my team are tough to handle, I’ve got to admit. After nine years, I finally said goodbye to my chief speechwriter, Jon Favreau. I watched him grow up. He’s almost like a son to me, he’s been with me so long. And I said to him when he first informed me of his decision, I said, “Favs, you can’t leave.” And he answered with three simple words — “yes, I can.” (Laughter.) Fortunately, he did not take the prompter on his way out. (Laughter.) That would have been a problem. (Laughter.)

With all these new faces, it’s hard to keep track of who is in, who is out. And I know it’s difficult for you guys as reporters. But I can offer you an easy way of remembering the new team. If Ted Cruz calls somebody a communist, then you know they’re in my cabinet. (Laughter.)

Jack Lew is getting started on his new role as Treasury Secretary. Jack is so low key, he makes Tim Geithner look like Tom Cruise. (Laughter.) Don’t worry, everybody, Jack signed off on that joke or a five year old drew a slinky. (Laughter.) I don’t know which. (Applause.)

Another big change has been at the State Department. Everybody has noticed that obviously. And let’s face it — Hillary is a tough act to follow. But John Kerry is doing great so far. He is doing everything he can to ensure continuity. Frankly, though, I think it’s time for him to stop showing up at work in pantsuits. (Laughter.) It’s a disturbing image. (Laughter.) It really is. (Laughter.) I don’t know where he buys them. He is a tall guy. (Laughter.)

And even though I’m just beginning my second term, I know that some folks are looking ahead to bigger things. Look, it’s no secret that my Vice President is still ambitious. But let’s face it, his age is an issue. Just the other day, I had to take Joe aside and say, “Joe, you are way too young to be the pope.” (Laughter.) “You can’t do it. You got to mature a little bit.” (Laughter.)

Now, I do want to end on a serious note. I know that there are people who get frustrated with the way journalism is practiced these days. And sometimes those people are me. (Laughter.) But the truth is our country needs you and our democracy needs you.

In an age when all it takes to attract attention is a Twitter handle and some followers, it’s easier than ever to get it wrong. But it’s more important than ever to get it right. And I am grateful for all the journalists who do one of the toughest jobs there is with integrity and insight and dedication — and a sense of purpose — that goes beyond a business model or a news cycle.

This year alone, reporters have exposed corruption here at home and around the world. They’ve risked everything to bring us stories from places like Syria and Kenya, stories that need to be told. And they’ve helped people understand the ways in which we’re all connected — how something that happens or doesn’t happen halfway around the world or here in Washington can have consequences for American families.

These are extraordinary times. The stakes are high and the tensions can sometimes be high as well. But while we’ll always have disagreements, I believe that we share the belief that a free press — a press that questions us, that holds us accountable, that sometimes gets under our skin — is absolutely an essential part of our democracy.