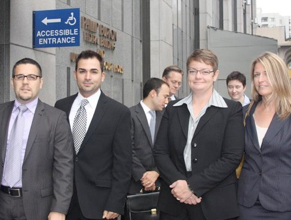 With the Supreme Court blocking a federal court in San Francisco from broadcasting the Proposition 8 trial on YouTube, two California men have done the next best thing to give the public a peak into the trial: re-enact it for YouTube, based on transcripts, liveblogging and tweets.

Knowing people were clamoring to see expert testimony by economic experts and anti-gay ministers, John Ireland and John Ainsworth are giving the trial the “let’s put on a show” treatment and reenacting the trial in a University of Southern California law school courtroom with actors filling in for the judge, lawyers, and witnesses.

“There is a huge buzz on the web about this trial,” USC law professor and video consultant David B. Cruz said in a statement announcing the project. “I think a lot of people across our country were poised to watch the opening statements on the first day.  When access was blocked, the thirst for information just grew exponentially.”

When Ireland and Ainsworth first announced they were going to re-enact the trial, they said they were basing their scripts on liveblogging by progressive blogger Firedoglake, gay rights grassroots activists Courage Campaignand other bloggers.  That plan has been altered, according to their website, by the release of actual transcripts provided by the attorneys challenging Proposition 8.

In the just-released preview, the men have done a great job of getting an actor who looks a lot like Judge Vaughn Walker. The preview reel is pretty dry, which means they are likely being very accurate about what is going on inside the courtroom. The video project’s creators–who both opposed Proposition 8–have vowed to keep things neutral and it will be interesting to see how the re-enactment gets edited and produced as the project advances.

The decision to block broadcasts has put a chill on same-sex marriage advocates’ desire to get their message out via video.  What was expected to be a public relations and legal coup has meant that same-sex marriage supporters–who have been very successful at using social media and viral video in their losing efforts to win marriage battles–have turned to other ways to get information out about the trial.

With the judge overseeing the case opening up the courtroom to laptop and texting, citizen journalists (and activists groups) have used the opportunity to tweet and liveblog the trial in ways rarely seen before in a federal court case.  Using the hashtag #Prop8, tweeters inside the courtroom have been giving a play-by-play of the trial. Some of the best have included Dan Levine (@fedcourtjunkie) of The Recorder, The Advocate (@TheAdvocateMag), two tweeters with the National Center for Lesbian Rights (@NCLRights and @Chris_Stoll) and the tweets by the American Foundation for Equal Rights, the folks funding the lawsuit ( @AmerEqualRights).

Opponents have been late to the social media game and are not doing much coverage of the trial. The Alliance Defense Fund ( @ADFMedia) has been tweeting the trial and ProtectMarriage has been doing limited blogging.

Despite the wall-to-wall coverage by the progressive and LGBT blogosphere, the trial has not exactly been full of legal revelations.  The expert testimony has been cathartic for same-sex marriage supporters, but unsurprising. Until late this week, there have been few fireworks in the courtroom with none of the bombshells which are likely to get people tuned-in to the trial.

That changed when there was finally a heated dispute over admitting evidence of religious groups’ involvement in pushing Prop 8 and some fascinating testimony by a defendant who wanted to be dropped from the case because he feared attacks from Prop 8 opponents and said he relied on the Internet for evidence that homosexuality was bad for marriage.

With the trial about to end, the producers need to start releasing the videos or interest in the trial could wain.  Still, who doesn’t want to kick back and watch a little expert evidence cross-examination on YouTube.