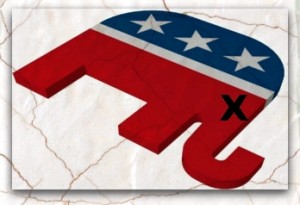 Is March 2013 the date mainstream conservatism met its demise?

How things have changed in less than three years! Back in the not-too-distant past of November 2010, conservatives like myself were reveling in our smashing midterm elections’ victory. Sure, Obama was in office but our rousing Tea Party voice, the one-after-another wave of businessmen and celebrities coming out of the woodwork to blast Obama, and the crop of fresh Republican senators we’d just elected had us walking with a strut in our step. We laughed haughtily, counted down the days to Obama’s all-but-certain eviction from 1600 Penn, and gleefully read the latest news on Drudge Report as we danced around our bedrooms with Risky Business exuberance (ok, maybe that was just me).

Then November 2012 handed us a crushing defeat. Not to worry, though. Days later, we calmly, optimistically recharged. ‘Conservatism had withstood back-to-back terms of Democratic presidents before,’ we figured. ‘We can hold the line on any further encroachment. Even another Obama term will not kill us.’

What happened this month to make it so historic? Three key developments (or three death-knells):

1) Immigration reform is all but a foregone conclusion. Five years ago, illegal immigration was the number one issue (even above the war on terrorism) for 86% of conservatives. And a 2004 National Review cover of a man jumping over a border fence unequivocally read “AGAINST AMNESTY.” 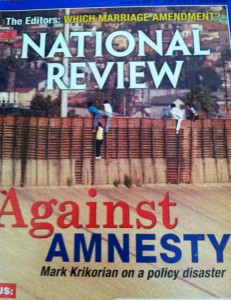 It was Democrats who were once known as the party of ‘acid, amnesty, and abortion.’ Even during last year’s GOP primaries, the candidates seemed to trip over themselves to be firmest on the issue (notwithstanding Newt’s concern for undocumented grandmothers). Yet, in a matter of months, conservatives have gone from Romney discussing ‘self-deportation’… to a widespread acceptance of legalizing 11 million, and even throwing in citizenship, to boot. The proposal, spearheaded by Senator Marco Rubio (R-FL), could have lost steam, however, had it not been for Senator Rand Paul (R-KY)– the GOP’s current superstar – coming out in favor of it this month. For all intents and purposes, Rand’s support was the final seal of approval needed and signified almost a check-and-mate for reform advocates. Considering the lack of pushback, the battle against ‘amnesty’ is now a relic of the past. (Also worth noting: In doing so, and in granting citizenship to 11 million illegals, most of whom are Latino – a voting bloc that leans Democratic by 2 to 1 and prefers big government by 75% – conservatism may have also sealed its fate for future elections.)

2) The gay marriage debate is essentially over. Why March 2013? It is when the momentum and timing all serendipitously fell into place:

a) On March 14th, Jimmy LaSalvia, head of GOProud, the gay conservatives organization, delivered an inspirational address during the Conservative Political Action Conference. LaSalvia spoke to a room that was over capacity, while the pro-traditional-marriage National Organization for Marriage spoke to a largely empty room. CPAC’s ban on GOProud’s participation had, ironically, only fueled a debate about gay marriage and gay rights amongst the Right, triggering many conservatives to reaffirm (myself included) or declare their support, further fragmenting the party on the issue;

(b) The following morning, March 15th, news broke that Senator Rob Portman (R-OH) now endorses gay marriage. Portman joined the ranks Dick Cheney, Laura Bush, Jon Huntsman, and Rep. Ileana Ros-Lehtinen (R – FL), as well as the scores (over 100) of high-profile Republicans who signed onto an amicus brief supporting same-sex marriage, submitted the first week of March. Lest she be late to the party, three days after Portman, Hillary Clinton jumped on the bandwagon, declaring her own support and, more importantly, drawing a line in the sand on the issue for 2016;

(c) The same day, a new Washington Post / ABC News poll emerged showing the dramatic shift in public opinion: support for same-sex marriage is now at a record-high 58%. Among Republicans and Republican-leaning independents under age 50, a majority (52%) now support it. In fact, it may all be over via the Supreme Court who, this week, will begin hearing two gay-marriage-related cases. The case regarding the Defense of Marriage Act could very well end up with the Court finding that the law violates the 14th Amendment and mandating that neither states nor the federal government can ban this ‘right.’ If so, it’s certainly ‘lights out’ for traditional marriage advocates. And continuing to combat gay marriage after a Supreme Court decision in its favor would be a public-image nightmare for the Right, and likely about as effective as combatting Roe has been; and

d) On Sunday’s This Week, Karl Rove stated he could imagine a pro-gay-marriage candidate as the GOP’s 2016 nominee.

3) The plan to defund ObamaCare — conservatives’ last stand after the Supreme Court failed to throw out the Act — is over. ObamaCare is here to stay. Despite public proclamations and (largely-symbolic) votes taken, without enough Congressional support, defunding will go nowhere. Many of us figured as much, hence our desperation when the Court upheld Obama’s signature legislation. The day may come when we do have the number of votes needed to defund or, better yet, repeal ObamaCare but, by then, the law will have already gone into place – and it is nigh impossible to defund, or repeal, something that has already been implemented, particularly in the healthcare field. ObamaCare may be amended and modified in the future but a full-scale repeal? Not going to happen.

Of course, all three of these stunning reversals are indirect products of the November 2012 election – so perhaps that is the day to list on the gravestone. But it was March 2013 where it became official.

Consider the magnitude: in this single month, three key, major tenets of conservatism – the battles against (1) amnesty; (2) gay marriage; and (3) socialized medicine (many rightly argue Obama is simply a stepping-stone to nationalized healthcare) – essentially vanished. Poof! Gone. Without these three, is conservatism (or what we generally know as mainstream conservatism) still even in existence?

As Republicans scramble to modify their positions, with even Jay Leno mocking the degree of the GOP’s re-invention (“We’ve changed our position on just about everything!”), is it still the same movement? A tiger does not change its stripes, sure – so when it does, safe to say it’s no longer a tiger.

But all is not lost for the Right. For ‘mainstream’ or ‘standard’ conservatism as we, or as our parents, knew it? Yes. But for a new, thoughtful, raw, and even purer, truer form of conservatism? This may just be the beginning. Libertarianism continues to make inroads in the movement and as that dust continues to settle, shake things up, and settle again, who knows where ‘conservatism’ will wind up by 2016, or even by the 2014 elections? And, regardless, there remains a whole host of issues on which the conservative battle remains strong: guns, taxes, entitlements* (*though it will be tough to ‘fight Santa Claus’ and, sure, we may never win a national election again — but I digress…), school choice, reducing the both the size and scope of government, defending religious freedom, abortion, and unions, to name a few. Do not despair, fellow conservatives! Chin up! Spirit of the Dambusters! Phoenix from the ashes! Hey, hmm, at least we have fewer battles to fight now!

Yes, March 2013 may be the death of a certain form of conservatism – but it may also be the birth of another.

The Grand Old Party needs both a funeral and a baby shower.