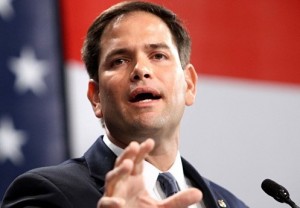 As Senator Marco Rubio (R-FL) continues to lead the charge towards immigration reform, his stance is certainly curious. Is it driven by a sincere desire to fix the system … or by a desire for political gain (both the gravitas of signature legislation and an attempt – albeit possibly pointless – to win the Latino vote in 2016)? Let’s take a look at Rubio’s previous statements made during, and leading up to, his successful run for U.S. Senate against former governor, Charlie Crist. In a March 2009 interview, Rubio conveyed a hardline stance against illegal immigration. When asked: “So what is your position? Are you pro-amnesty for illegal immigration?,” Rubio answered:

“No, no – never have been. In fact, I’m strongly against amnesty for a number of different reasons. The first is, I always use the example of the speed limit: If you say the speed limit is 70 but you don’t ticket people until they reach 80, well then the speed limit is really 80, it’s not 70. And amnesty is the same thing. You can’t –- the most important thing we need to do is enforce our existing laws. We have existing immigration laws that are not being adequately enforced. Nothing will make it harder to enforce your existing laws [than] if you reward people who broke them. In essence if you go to people and say: “Look, well you’ve been here for so long that even though you broke the law we’re going to let you stay.” Number one, it demoralizes the people that are going through the legal process: it’s a very clear signal that ‘why go through the legal process if you can accomplish the same thing through the illegal process?’ And number two, it demoralizes the people enforcing the law. So I am not and I will never support —  never have and never will support — any effort to grant blanket, legalization amnesty to folks who have entered or stayed in this country illegally.”

The interview later touched on the issue again.

INTERVIEWER: Let’s say you become the next senator from the State of Florida. If a bill crosses your desk regarding immigration reform, how would you vote? Would you vote for or against?

RUBIO: Well, what’s in the bill? I mean, it really depends what the bill is about. I mean if the bill grants amnesty, if the bill rewards folks who have illegally entered the country—

INTERVIEWER: Let’s say ‘All of the above.’ Let’s just say it promotes amnesty—

In fact, Rubio repeatedly distinguished himself from his opponent on the issue of illegal immigration: “He [Crist] supported cap and trade. He supported the stimulus package. He supported amnesty for illegal aliens.” In May 2009, Rubio told the Lauderdale Beach Republican Club that he would not have voted in favor of the Crist / Martinez legislation that would have allowed illegal workers to earn legal status, which he called “blanket legalization.” Rubio stated: “Nothing is more disruptive to illegal immigration than illegal immigration. We must secure our borders.”

The following year, in a March 2010 debate against Crist on Fox News Sunday, Rubio stated:

“As far as amnesty, that’s where the governor [Crist] and I disagree. He would have voted for the McCain plan. I think that plan is wrong, and the reason why I think it’s wrong is that if you grant amnesty, as the governor proposes that we do, in any form, whether it’s back of the line or so forth, you will destroy any chance we will ever have of having a legal immigration system that works here in America.”

And, though Rubio had originally criticized Arizona’s controversial immigration law (where police could question a person’s legal status during a lawful stop or detention), he later switched and supported it. A May 2010 Human Events piece featured an interview between conservative author Jason Matera and the Senate contender. In addition to Rubio declaring his support for the Arizona law, Matera asked: “Are you in favor of creating a path for citizenship for the millions who are here?” Rubio answered:

“Well, we have a path for citizenship. It’s called coming legally into this country. The ones who are already here. You can’t do it. Look, let me say two things about it. Number one is I think that the vast majority of the people that are in this country illegally, whether they entered illegally and overstayed their visas, they’re here because they want to provide their families with opportunity. I get that. I understand that. And I know that because I know people in that status. That being said, America cannot be the only country in the world that does not observe or enforce its immigration laws. A key part of your sovereignty is the ability to control the influx and out flow of your people is the ability to secure your border. And you’re never going to be able to do that if you have an immigration system that says ‘come to this country illegally. If you’re able to stay here long enough, you’re able to stay here forever.’ And you’re never going to have a legal immigration system that works if you grant amnesty. And that’s why I’ve always believed that, no matter how well-intentioned it is. I understand the human stories that we’re going to…We’re gonna….There are going to be stories of very young kids that were brought to this country at a very young age who don’t even speak Spanish that are going to be sent back to Nicaragua or some other place. And it’s gonna feel weird and I understand that. The goal here is to have an immigration policy that works. And if you provide a path for people to enter this country illegally and if they stay here long enough and pay enough in taxes, we’ll let them stay legally…why would anyone come in through the legal process?”

UPDATE: Perhaps most telling is the October 2010 CNN debate between Rubio and Crist, moderated by Candy Crowley, in which Rubio apparently alluded to self-deportation and also noted that a pathway to citizenship (what his current plan suggests) is ‘code’ for amnesty:

CROWLEY: So you[r] plan is that you’re going to close the borders, get the electronic system, fix the legal system, and then do what?

RUBIO: First of all, earned path to citizenship is basically code for amnesty….

Three years is a significant period of time and Senator Rubio certainly has the right to re-evaluate the issue and change his position. But the 180-degree shift — from hardliner to fervent advocate — is one that should prompt questions, raise eyebrows, and demand answers.

[All emphasis in bold is this column’s author’s.]